A Tyranny of Petticoats

A Tyranny of Petticoats: 15 Stories of Belles, Bank Robbers & Other Badass Girls, edited by Jessica Spotswood (2016) 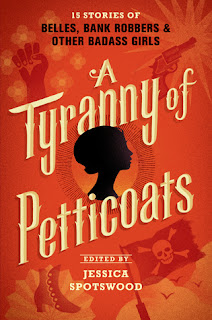 If you have been reading this blog for a while you probably know how much I love author Jessica Spotswood. The Cahill Witch Chronicles is one of my favorite series, and I love her new contemporary novel Wild Swans. I'm very happy that Spotswood has stuck to her feminist tradition and edited this book of short stories that feature a diverse cast of young female characters making their way in the world and creating the lives they want. Authors include such well-known names as Marie Lu, Elizabeth Wein, and Marissa Mayer, plus several authors who are completely new to me. All stories are historical fiction that take place in the United States, but some have elements of fantasy and magical realism. They are arranged chronologically, the year and location listed below each title, beginning in 1710 in British North America, ending in Illinois in the summer of 1968.

As I began, I thought I'd write down the titles of the stories I especially liked so I'd remember later which ones I wanted to talk about. Pretty soon it became clear it would be much easier to write down the few I wasn't super crazy about. Mind you, even the ones I didn't like weren't bad, they simply weren't my style (i.e. magical realism.)

So what did I love? "The Journey" by Marie Lu, in which a young Inuit woman's parents are killed by white invaders and she must flee with her sled and dogs to try and reach another village. "The Red Raven Ball" by Caroline Tung Richmond set in Washington D.C. during the Civil War and stars a daring girl determined to reveal a spy at a fancy ball thrown by her grandmother. "Pearls" by Beth Revis, in which a teenage girl is will be forced to marry the man who raped her, but instead leaves to begin a new life as a teacher in remote Wyoming Territory. "The Legendary Garrett Girls" by Y.S. Lee, the story of two bartending sisters in Alaska and what happens when renegade men decide to steal their business. "The Color of the Sky" by Elizabeth Wein, recounting the story of Bessie Coleman, the first black woman to get a pilot's license. And so on, and on. This is a really strong collection.

Some stories I kind of wish were novel-length. I would have loved to spend more time with Yakone, the Inuit woman in Alaska in the early 1700s. Or with brave Helen, leaving behind the men who want to control her and forging a new life as a teacher. Or Madeleine, the title character of Spotswood's story "Madeleine's Choice," who learns early how to make her way through an unfair world and I just want to know if she ends up being happy with her life.

I also learned a lot about American history from this collection. I didn't know about the lives of free people of color in the early 19th century, about the quadroon balls and the "arrangements" between white men and free black women that Spotswood wrote about in "Madeleine's Choice." I didn't know anything about Bessie Coleman either until reading Elizabeth Wein's story. Or the Black Panthers, which of course I'd heard of but never really read anything about. The author of the "Pulse of the Panthers," Kekla Magoon, is publishing an in-depth book about the history and legacy of the Black Panthers which I'm hoping is also a teen book so I can recommend it to my book group. There is so little historical fiction that takes places in the US, yet our history is so rich with surprising and adventurous stories.

I could go on at length about all the stories in this collection - there were great ones that I didn't even mention here. They are all worth reading, and you'll find much to admire about the brave, fierce, unstoppable young women that you'll meet.
Posted by 3goodrats at 7:30 AM