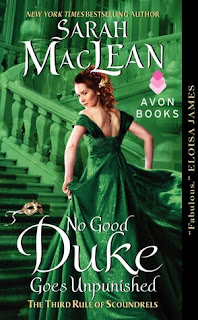 I've been reading this series completely out of order. I began with #4, Never Judge a Lady By Her Cover, then progressed to #1, A Rogue by Any Other Name. Now I've just finished #3, No Good Duke Goes Unpunished and I can confidently say that this series should win some sort of prize for Best Titles Ever. The one I haven't read, #2, is called One Good Earl Deserves a Lover. I rest my case.

But about the story. It begins with the Duke of Lamont waking up and expecting to find a woman next to him in bed, but finding only blood. He has no memory of the night. He does remember the woman though, because she was engaged to marry his father. Now she's apparently dead and for the next twelve years he's known as the Killer Duke.

Then one day she appears - Mara Lowe. She's been in hiding this whole time, but now feels a lot of guilt about setting up this innocent guy. She offers to finally clear his name and they enter into an agreement in which he will pay her to spend time with him in public and then she will be revealed as who she truly is, exonerating him. The money will go towards saving the orphanage she runs. She's desperate for money because her reckless, irresponsible brother has lost everything. Of course, even though Temple (as the Duke is called these days) and Mara should be sworn enemies because of their history, they are drawn to each other despite how much they each try to resist.

Mara has all the best qualities of a romance heroine. She is strong, witty, doesn't take crap from anyone, and despite living in the 19th century she can take care of herself perfectly well, thank you very much. I loved some of the things she said and, in fact, would love to start using the words "scallawaginous" and "scoundrelly." Also, she has a pet pig named Lavender who sleeps on a cushion. As pet pigs should. This novel also has one of my very favorite tropes: Temple becomes gravely injured and Mara helps nurse him back to health. Well, she doesn't help a whole lot since she isn't allowed near him for a while, but it still works for me.

The only issue I really had is that the characters seemed determined to make things more difficult for themselves than they needed to be, which is an all-too-common problem I encounter in romance novels. There was a point where it seemed like they were pretty much all set, but Mara still insisted they couldn't be together. Oh, and the word "worrying" was really overused. Not as in an anxious feeling, but as in fiddling with something (like a lip or a nipple.) It was used about 5 times in the course of just a few pages, which seems excessive. But these are very minor issues with a book that I found overall pretty enjoyable.

You may recall that I struggled a bit with the last book I read because I wasn't really in the mood to read about Soviet oppression around the time of the US election, but do you know what I did want to read? This. This is exactly what I needed. I actually began it before finishing the last book because I really, really needed some comfort and pleasure. Sarah MacLean came through for me, as I knew she would. I have only one more book in this series to read, and I was surprised to learn that on Goodreads it has the highest rating in the series. I've enjoyed them all so far, but I absolutely loved Never Judge a Lady by Her Cover, and now I'm looking forward to reading the one that, apparently, many people loved even more.
Posted by 3goodrats at 9:13 AM