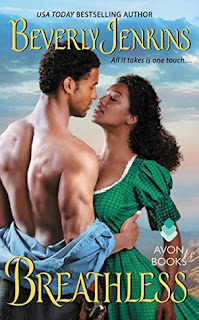 At the end of the Beverly Jenkins novel Forbidden, Eddy's little nieces came to live with her and Rhine. Now the girls are grown up and the older one, Portia, is the heroine of this new installment of the Old West series.

The family now lives in Arizona Territory and Portia manages the hotel they own. Although some local men try to romance her, Portia's experience as the daughter of a whore makes her shy away from involvement with men. As much as her little sister Regan hopes for a fairytale romance, Portia is completely uninterested. But then an old family friend returns after a stint in a Mexican prison, and signs on to manage a local ranch, and the two can't deny their attraction.

As far as romances go, there was little keeping these two apart. Portia was resistant at first, of course, but she is happy to befriend Kent, who she hasn't seen since she was quite young. He's obviously trustworthy and kind and cares about her, so it doesn't take much to kindle the sparks between them. This is unusual for a romance, but honestly I'm happy to do without the self-generated angst that the characters need to overcome. Theirs was just a nice story about two people who really deserve each other getting together.

So what is there to keep interest in this story, if not the tension between potential romantic partners? A lot, as it turns out. This is the old west, and there are threats from every direction. When the elderly neighbor died, Rhine bought his ranch and put Kent in charge of it. One of the guys who had been working there was very unhappy about this and did some very bad things. Everyone wanted to form a posse to go after him, but these plans were complicated because Geronimo was on the loose and all the local law enforcement was being used in his search. Meanwhile, some city folk came to stay and witnessed the very bad things that happened, and there was a bit of a brouhaha about that (plus these people were just extremely difficult.) And, Kent's dad decided to try and fix him up with someone who is not Portia. So there's a whole lot going on here that kept me going!

What I like most about these books, I think, are just experiencing this particular time and place. I don't read westerns, but stick in some strong women having romances and I'm more than happy to read about this unfamiliar setting. (See also: Texas Destiny) I'm also learning a lot about the lives of African-Americans in American history, which we just don't get nearly enough of. We learn about slavery, but not what it's like for former slaves and their families just trying to live afterward. In fact, the next story we usually get in black history is the civil rights movement in the 60s. It's nice to get some insight into the lives of black people outside of these two specific eras.

I listened to the audiobook version, which was read by Kim Staunton, also the narrator of Forbidden. Again she did a nice job. During this book, she unfortunately did a couple of non-American accents and that did not go well, but those were short passages that only happened a couple of times. I like her narration enough to listen to her read the next one in the series as well.

Just after finishing this I listened to an episode of Smart Podcast, Trashy Books in which Jenkins was interviewed about her next book. Portia's little sister Regan will star and I am so excited because she is going to Wyoming as a mail-order bride and that is exactly the sort of setup that I love. Can't wait!
Posted by 3goodrats at 5:07 PM