Shirley Jackson: A Rather Haunted Life by Ruth Franklin (2016) 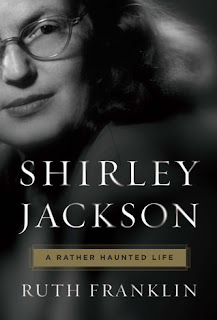 Shockingly, I have finished a 500-page biography about Shirley Jackson. Biography is a category on my 2017 Personal Reading Challenge because in theory I'd like to know more about the lives of famous and important people. I've read a few biographies in the past that I really liked, such as The Secret Life of the Lonely Doll and Personal History by Katherine Graham, and a couple about Eleanor Roosevelt and Marilyn Monroe, and I think that is the sum total of biographies that I've read in my life. I liked all of those but somehow I still find biographies too daunting to read. I heard about this Shirley Jackson biography when it came out in the fall and was intrigued, because I loved both The Haunting of Hill House and We Have Always Lived in the Castle, but didn't actually think I'd read it until I impulsively picked it up one day.

As it turns out, even at 500 pages this wasn't difficult. I found Franklin's style totally accessible and enjoyed reading about Jackson's life and career. The chapters coordinated with time periods, in most cases the period of writing and publication of a book. Sometimes there was brief discussion of something that hadn't happened yet chronologically, and that was confusing because I had a hard time keeping the timeline straight. But that's my only criticism. Some Goodreads readers didn't like the amount of information they saw as peripheral to her life, such as family history covered at the beginning as it related to architecture in California, but I actually found that all pretty interesting and it did come up later so it made sense to me. Perhaps there was a bit too much discussion of Jackson's husband's work for my taste, but that might be because I didn't really understand it. Had his research been on a topic that I was more interested in, I definitely would have liked reading about it. But most of this peripheral information provided a context that I enjoyed because I had a better understanding of this particular era.

Jackson's relationship with her husband, Stanley Hyman, was fascinating but sad. They seemed perfect for each other in many ways, but Hyman was a chronic womanizer who remained more interested in his classes (and his young female students) than his family. They had four children together and Jackson identified both as a housewife and a writer. Her emotional struggles were partly, though I imagine not entirely, due to her husband's infidelity and although she considered leaving him, she never did. Franklin was able to gather a lot about Jackson's thoughts and feelings as she was a regular letter-writer throughout her life which are a trove of information.

Because of the time period (roughly 1930s-1960s) I was very interested in some of the social issues of the time. For instance, Stanley Hyman was Jewish and the couple faced a great deal of opposition to their marriage. They were pretty socially progressive for their time, closely befriend the African-American writer Ralph Ellison, and they also counted a couple of gay men among their friends. There's speculation that the character Theodora from The Haunting of Hill House is a lesbian, and that is pretty much confirmed here, Franklin revealing that Theodora was written as a lesbian in an early draft of the novel. Interestingly, Jackson wrote several lesbian characters but also found the idea of lesbianism a bit horrifying. Franklin points out that this was typical of people in her era and class, but I found it an interesting and confusing dichotomy.

There's so much more I'd love to talk about, but this is getting long and I've had to greatly reduce my screen time this week because of an eye issue. So I'll just wrap up by saying how glad I am that I took the plunge into this somewhat lengthy but fascinating book about an author I just haven't read enough of. I want to read more of her short stories and her novel The Sundial. If you're interested in Shirley Jackson, or just enjoy a good biography, I highly recommend this book.
Posted by 3goodrats at 3:54 PM