The Smell of Other People's Houses

The Smell of Other People's Houses by Bonnie-Sue Hitchcock (2016) 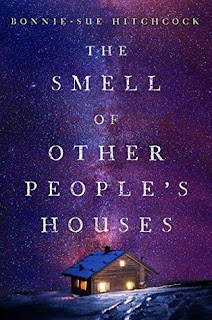 This teen book is told from the perspective of four different kids in Alaska in 1970 as their lives intersect in unexpected ways. First we meet Ruth, who lives with her Gran and her little sister Lily. She has a boyfriend, with whom she makes a very stupid mistake. Dora is Inupiat (Eskimo, not to be confused with Indian, like her Athabascan friend Dumpling) and stays with Dumpling's family because it's not safe at home. Alyce wants to be a ballerina, but her summer fishing trip with her dad may get in the way of a very important audition and she's afraid to ask permission to go. The final narrator is Hank, who stows away on a ferry with his two brothers in an attempt to escape their mother's horrible boyfriend. But their escape doesn't go as planned, which sends their story in a slightly different trajectory.

Ruth's story is most prominent, beginning and ending the novel. I don't think it's a spoiler to say that she unexpectedly becomes pregnant, and the repercussions lead to her learning much more about her family, especially her stern Catholic grandmother. She becomes friendly with Dumpling, not a narrator but still important, and Dora is jealous of their friendship because she considers Dumpling her best friend. I like that the characters are enough in the same circles that we get bits of their stories from each other's narration, because it adds a slightly different perspective and gives them each more depth.

I loved that the story represented native people and families who fish and hunt. It wasn't made a big deal of either. When Alyce casually mentions to Sam that a particular spot was where she shot her first deer, he doesn't act surprised or shocked because he is part of that culture too. And it's a culture that we don't often (ever?) see in teen fiction. We talk a lot about diversity in literature, but I think sometimes we forget how many different kinds of diversity there are; it's not just about race and religion. There are plenty of teens for whom hunting and fishing are a regular part of their lives, and I really liked reading about Alyce's expertise helping aboard her dad's fishing boat.

Considering all that's going on, this is a surprisingly short book. There's nothing I didn't like about it, but I did want more. I know it's a teen book and I was initially pleasantly surprised that it's only 220-ish pages, but in the end I could have been happy with the level of detail usually found in adult fiction. I wanted more about Ruth's time with the nuns, more details about Alyce's family's fishing trips, more background about Sam, Jack, and Hank's troubles with their father, and just more about the time and place in which they lived. This isn't a complaint though, it's really a compliment!

But the short length doesn't mean that Hitchcock skimped on language. Her imagery is simple, but perfectly vivid. Selma has "enormous brown eyes like a seal," and Dora stays with Dumpling's family, where "the whole house smells like it's smothered in gravy." Alyce contrasts the lush greenery of Southeast Alaska with home: "Up north the skinny black spruce trees like like they're constantly trying to fill their lungs, their roots suffocating in permafrost." I also enjoyed unfamiliar details of Alaskan life, like the frequent snacking on pilot bread, which I hadn't heard of before, but is apparently similar to hardtack.

Reading two books in a row set in Alaska really just strengthens my desire to visit, even though they were both set in earlier times and I imagine things have changed. I read this for my Not-So-Young Adult book group and I'm really looking forward to our discussion and learning what they all thought of it. If you like teen fiction and want something a little different from the usual fare, I recommend picking this one up!
Posted by 3goodrats at 9:05 AM