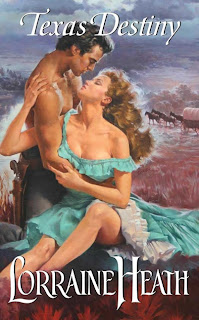 Amelia Carson accepted marriage to a man she had never met, but when she arrived on the train in Fort Worth it wasn't Dallas Leigh who arrived to meet her, it was his brother Houston. Quiet and gruff, Houston still wears the scars from the Civil War, and seems convinced that he doesn't deserve anything good in his life. But as he and Amelia spend three weeks traveling across Texas to the ranch where she is to marry Dallas, they find themselves helplessly drawn to one another.

Houston and Amelia were great characters, both with tough exteriors and carrying around a world of hurt.  I really dislike when character think they are worth little because of scars or other physical attributes (although I know it's not unrealistic) but it became clear there was much more to Houston's feelings of low self-worth than his looks. Amelia carried her own sort of scars from the war, just not ones that were visible. They understood each other so well that it was easy to see why they would be drawn to each other. I also appreciated that Dallas was also a perfectly good guy, because making the losing love interest a jerk would be an easy and cheap way out. (It would also make it impossible to write the sequels.) The third and youngest brother, Austin, was sweet and charming. They all made me want to read the other two books in the series.

Because the characters were well-drawn, the romance was also believable. It was a sticky situation, but nothing about it felt contrived. I could absolutely understand why both Houston and Amelia were drawn to each other, and also understood how torn they both felt because they wanted to do the right thing. Houston's internal issues almost seemed like a bit much, but considering that nobody in his family actually talked about what happened during the war it was easy to see why he thought and felt the way he did. It was all really quite well done compared to most of the romances I've read.

This is the closest I've come to reading a Western, and surprisingly I really liked those aspects of the story - the cowboys, the long dusty trip across the state, eating beans from a can next to a campfire. Plus the obstacles encountered as Amelia and Houston crossed the state by wagon, such as when they both almost drowned in a river, and when Amelia was bitten by a poisonous snake. Not to mention the entire prospect of traveling to a place where she would be the only woman around to marry a man she had never met. I even found the language endearing. Somehow exclamations like "Hot diggity damn!" which could have been totally hokey seemed appropriate.

This novel is older, but caught my attention after being featured on Smart Bitches, Trashy Books. As I was just finishing up Wolf Hall, I pounced on this mainly because it was the opposite of Wolf Hall. It was exactly what I needed.
Posted by 3goodrats at 7:17 PM