The Stranger in the Woods

The Stranger in the Woods: The Extraordinary Story of the last True Hermit by Michael Finkel (2017) 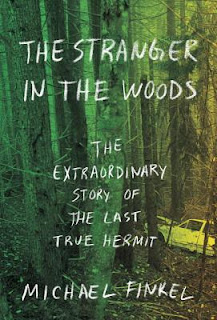 You might remember a news story out of Maine a few years ago, when a man was arrested for theft and it was discovered that he had been living alone in the woods for 27 years. When he was only 20, Christopher Knight left the world behind without a word to his family and set up camp in a well-hidden area in the woods. He survived by stealing food and other supplies from local camps surrounding some nearby lakes, including a camp for disabled children and adults where he was eventually caught. The author corresponded with Knight and visited him in jail for interviews. This short book is the result of his research.

I think what most people most want to know about Christopher Knight is why he went into the woods. Knight can't really explain it himself, but it's clear that he is not a social person at all, and I can understand why someone might want to just check out from the modern world and go live alone in the woods. He seemed to recoil from a lot of the trappings of life in our society, and it's not hard to blame him when he talks about how unhappy people seem to be at their jobs, and the amount of useless crap they buy. When he left the world Knight was really alone, not Thoreau alone. When mention of the famous author comes up, Knight shows only disdain for the poseur. (What he says is true too - Thoreau talked the talk, but he didn't really walk the walk. He often dined at friends' houses, for instance, rather than staying home alone and cooking food he grew himself. I'm not a fan of Thoreau either.)

I was more interested in the how of Knight's life. Apparently some who heard his story thought he was lying; they didn't think it was possible. For instance, he didn't require any medical help for 27 years. He claims it's because he wasn't around people to get their germs and that may be true. Or maybe he was just lucky. He didn't do a lot of activity that put him in danger aside from the stealing he depended on to survive, and the only times he left his camp were when he needed to stock up on supplies.

As much as I was sympathetic to his desire to get away from it all, I did have a hard time with the theft. You've got to take care of yourself if you're able to, and maybe he should have done a bit more living off the land. He didn't even try to grow vegetables. I think this may have been because he was so ready to just pack up and leave if he was discovered, and maybe he didn't want to start a project that seemed even semi-permanent. Or maybe he just wasn't a good planner. Considering that he seemed to take to the woods impulsively, that could certainly be the case. It's hard to know.

Public perception of the "Maine hermit," as he was called, varied. The local deli Big G's (which you should absolutely visit if you're ever in Waterville, ME, because it's delicious) named a sandwich The Hermit after him. A Dutch artist made a whole series of paintings inspired by him. Of course all the locals talked about him, and I was surprised to hear how many of them weren't upset that he stole their stuff and wished he had been left alone. Others talked of their resentment at having to install security systems on their camps, and how the regular break-ins left them in fear for years. I was curious about his family's response to this whole thing, but for the most part they didn't want to talk to Finkel. Like Christopher Knight, they were all a bit stand-offish. They did admit they thought he was dead that whole time, so of course it was a shock to learn the truth.

Finkel didn't really get enough out of Knight for an entire book (Knight didn't actually do a lot to talk about), but he added some bits about hermits and solitude and whatnot that was actually quite interesting. Did you know that people who live in cities have chronically elevated levels of stress hormones? I didn't, but as someone who lives in a city, I'm not surprised. On the other hand, spending time in quiet, rural settings makes people calmer, less depressed, and improves their cognition and memory. Indeed, Knight reported spending a good deal of time just sitting in quiet meditation and daydreaming, and says he was never bored. However, solitude in the extreme leads to all sorts of bad effects, as we've learned from studies about solitary confinement.

I've been interested in Christopher Knight's story since it first broke, especially since I used to live in that area. But I'm also fascinated by stories of people who just give everything up and break with their life and do something completely different. This was a very quick read, but I found a lot here to think about. It would be a great choice for a book discussion group.
Posted by 3goodrats at 9:06 AM