The Summer Before the War

The Summer Before the War by Helen Simonson (2016) 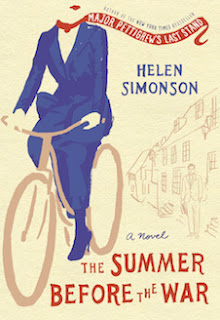 Beatrice Nash arrives at the small town of Rye in the summer of 1914, where she will be working as a Latin teacher. She is still getting over the recent death of her father, and her new independence - and conviction never to marry - are what has made her so determined to secure full-time employment. Her champion in securing this job is Agatha Kent, and Beatrice quickly befriends Agatha and her nephews, Daniel and Hugh. Over the summer, Beatrice tutors some youngsters, including a very intellectually promising Gypsy boy known as Snout. She also becomes closer with Hugh, though just as friends (obviously!) as he is sort of engaged to the daughter of his mentor. But as the months go on, war looms ever closer and the pleasant summer must come to an end.

The first effects of the war on the town of Rye are felt with the arrival of refugees from Belgium. Everyone is behind the war effort and wants to look patriotic, and many offer to take in refugees. But they want children, and many are disappointed that refugees often are entire families, which goes to show just how much of this generosity is genuine. This is symptomatic of the small-minded people in this town, who are constantly insinuating, manipulating others, and trying to keep in company of those who have secure, respectful positions in society.

Beatrice is far too practical for all of this, and we get to see over and over the way she bucks society's views of what is appropriate. She takes in a refugee, and then defends her when she is suddenly looked upon less favorably. She also supports young Snout for a scholarship, although he is viewed as an inappropriate candidate - despite his intelligence and interest in academia - simply because of his Romani background. Beatrice is also continually frustrated at the way men make decisions for women, and are completely allowed to do so. For a single woman like herself, this is especially difficult and even dangerous. I really loved Beatrice, for her intelligence, sense of justice, practical mind, and boundless compassion.

After last fall's U.S. presidential election I put up a display in the library about kindness and compassion, which had seemed in short supply for the entire interminable campaign season. This book was recommended to me as a candidate for that display, and now I can see why. Beatrice was welcomed to Rye so kindly by Agatha and her family, and then several of them took in refugees out of a genuine sense of compassion for those fleeing war. Agatha maintained a friendly relationship with Snout's Gypsy grandmother, despite the fact that she was ostracized by a large portion of the town. Many of the characters put their personal interests aside to take care of each other when needed, and became distraught when they were unable to successfully champion another's interest. A man leaving to go to war asked Beatrice to write to him, clearly insinuating feelings she didn't reciprocate, but although she was taken aback at his assumption, she softened when thinking about the dangers he faced and relented to write him some friendly words from home. It was all wonderfully heartwarming without being over sentimental or trite.

The story progressed at a rather slow pace - and it was long so it took me over a week to read - but I didn't mind at all because I so enjoyed spending time with these characters. I honestly don't know why it took me so long to get to this book, because I loved Simonson's last book, Major Pettigrew's Last Stand. But I can thank my Personal Reading Challenge for finally pushing me to read it.
Posted by 3goodrats at 8:28 AM