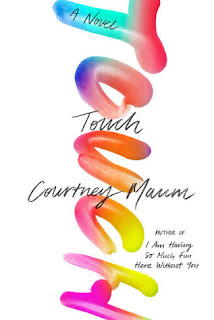 Sloane Jacobsen works as a trend forecaster. She predicted the now-ubiquitous swipe, a motion familiar to any smartphone user these days. She predicted the rise of childlessness, and has been hired as a consultant by tech company Mammoth to help gear up for their huge annual conference which will be devoted to the topic. But even as she begins work on tech products for people without children, she senses a huge shift away from technology entirely, a new embracing of person-to-person contact.

Ironically, Sloane is living far, far from that ideal herself. Her long-term partner, Roman, has taken to wearing a Zentai suit and proclaiming the death of penetrative sex in favor of more virtual options. She's been out of touch with her family since she moved to Paris immediately following her father's death. They haven't forgiven her for abandoning them in their grief. As her visions of the future become stronger, she finds her new outlook at odds with both her job and her personal life.

When I read about the premise for this novel I was instantly intrigued. A backlash against our screen-obsessed social-media-driven lifestyles? Yes, please! But it's not just a great idea, thankfully; it's also very well executed. Sloane is a well-known, driven professional, who takes this temporary job at a cutting-edge tech company and then realizes, and begins exposing, how ridiculous it all is. Mammoth has a recognizable corporate culture, but with just enough more to make it slightly alien. Upon arrival, Sloane was given a self-driving car named Anastasia, who not only brewed fantastic coffee but was skilled in the art of conversation. The company not only has a beer pong table (believable), but it provides kombucha on tap, "conflict-free" food, and is "scent-branded," with office diffusers emitting a mixture of citrus and lemongrass. Some employees wore only long johns to work. It seems to take place in the future, but not terribly far off. There's the very sophisticated self-driving car, and the fact that Roman has watched Pitch Perfect 3 many times (it will be released in December 2017), and some indications that perhaps terrorism has increased: "Overhead, the sky was empty. Red alerts throughout the city. Another no-fly day."

I love the way Maum expanded on her themes. For instance, a office discussion about how we rarely have surprises anymore because we rely on technology to tell us if someone has kids before we go on a date with them, or if a restaurant is good before we try it. And Sloane hoped people wouldn't buy into Roman's idea about the end of sex, but acknowledges a generation "raised on a diet of withholding- free from additives, free from BPA, free from communal love." Everything is believable because it's visible in our culture, but it's taken just one step further, which I suppose is the key to great satire.

This story provided so much to think about, and I was kind of excited about Sloane's ideas as I was reading. I knew she would end up making big changes in her life because of her new way of thinking and I couldn't wait to see how that went for her. She had a lot of pain and emptiness in her life, and I felt so invested in her potential happiness. She felt guilty for basically abandoning her family, and as much as she tries to stay in touch with them now, she's just not there and isn't really in the loop about what's going on. This part of the story struck me, because while I've never intentionally avoided my family, I do live two states away and feel pretty removed. This is the only book I've read where a character also felt really out of the loop with their family.

I also liked that her trend forecasting was based not on data but on actual premonitions that came to her in psychic-style visions. It's an unusual blend of technology and New Age ideas that you don't usually come across in the same book. I wasn't sure how I'd feel about that because I don't really believe in psychic powers, but in this case it somehow worked for me.

The Goodreads description compares this novel to those by Maria Semple and Jess Walter, neither of which seem quite right to me, though it's definitely as good as their books. It's not zany like Maria Semple, and the only Jess Walter book I've read was Beautiful Ruins which is historical fiction and completely different from this. So don't expect anything like those, but do expect excellent satire that is fresh and original.

Touch was just published a few weeks ago so I haven't heard a lot about it, but I'm looking forward to hearing what other people think about it. I'll definitely be recommending it a lot!
Posted by 3goodrats at 8:12 PM