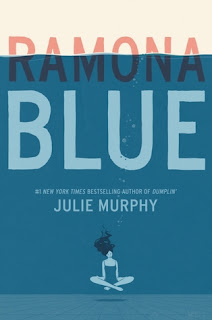 In the small town of Eulogy, Mississippi Ramona stood out in many ways: a lesbian with blue hair who stood at more than six feet tall, she was confident that she needed to take care of her pregnant sister, Hattie, and that she was outgrowing the crowded trailer where the girls lived with their father and, now, Hattie's boyfriend. Yet this was her life and always would be. College is out of the picture with the coming responsibility of her new niece or nephew. When her childhood friend Freddie returns, they're both happy to leap back into their friendship. But soon it turns into something more, and Ramona begins questioning a lot that she has always taken for granted.

First of all, I'm so glad to see a new teen book set in a small town in the South. Teen books set in rural areas was on my recent reading wishlist. Thank you, Julie Murphy, for making my reading wishes come true! (And stay tuned for my next audiobook review, which is ALSO a teen book set in a rural area!) Murphy really captured the feeling of living in a small town where you know everyone and kind of feel like you're outgrowing everything, and for Ramona this was especially complicated because of her sister's pregnancy. Hattie's relationships tended to be brief so Ramona had no illusions the father would remain in the picture. And the family had almost nothing - they lost everything in hurricane Katrina when Ramona was five and it took them a long time to get back in a stable place. Ramona has a couple of jobs so she can contribute to the family income, and with a baby on the way, finances are even more strained. It's not hard to see why she thinks college is out of the question.

When the story opens, Ramona is trying to navigate a long-distance relationship with Grace, who came to Eulogy for the summer and is now back at home. Also back at home? Her boyfriend, who she has not broken up with as promised. Ramona is angry at Grace's unwillingness to come out, but Grace clarifies to Ramona, during one of my favorite conversations between the two, that she's still trying to figure things out, saying "that doesn't mean I'm hiding, it means I'm learning." Freddie was having his own trouble with a long-distance relationship he was struggling to keep alive, though it hardly seemed worth fighting for. After admitting defeat, he says to Ramona, "It's sad that sometimes we let ourselves believe that if it's not bad, it must be good."

Ramona and her friends were so much fun to hang out with, and were such great people. Her friends Ruth and Saul were brother and sister, both gay, and they all stood by each other. Hattie was super nice and she and Ramona were pretty devoted to each other despite their many differences. Oh, and they played MASH! There was a good amount of MASH in this book, which I also played a ton of growing up and had totally forgotten about. I also really appreciated that Ramona is one of the few female characters who is allowed to be interested in sex (which I think I've complained about a lot, but, man, it really annoys me!) Ramona says, "I think about sex. Girls think about sex. Sometimes a lot. I hate this idea that boys are thinking about sex nonstop and girls are thinking about, what? Stationary and garden gnomes? No."

Which is not to say, of course, that Ramona is as incredibly clear about everything as she would like to be. When she and Freddie start getting romantic, she is surprised but likes him so much she isn't about to steer clear because she has worn the lesbian label for so long. But she doesn't want to her mother to know. Her mother has for years been telling Ramona that liking girls is just a phase, and as much as Ramona doesn't want to care about what her mother thinks, neither does she want her mother to have the satisfaction of thinking she was right all this time.

The narration was great! I'm honestly not a good judge of whether Therese Plummer's southern accent was real, or sounded genuine, but I do know that I really enjoyed hearing her read this book to me.

Anyone who likes teen books should check this one out, and go back and read Murphy's last book, Dumplin', while you're at it!
Posted by 3goodrats at 5:59 PM

I've been meaning to check this one out. Great review!
Megan @ http://wanderingsofabookbird.blogspot.co.uk/