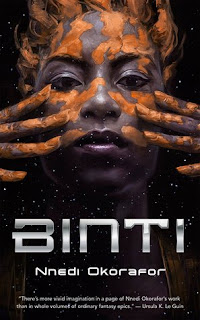 As you may know, Nnedi Okorafor is a hot new science fiction author. Every time I turn around someone is recommending one of her books, either at work in the library or on one of the many book blogs that I read. I've been wanting to read her since I saw one of her books listed on For Harriet's books by black women that everyone must read, which I used for a display last January. Finally I requested a copy of her novella, Binti, which is hard to come by since it is pretty much always checked out.

Binti is the first of the Himba people to be offered a place at the elite Oomza University, and her family would not have approved, but it's an opportunity she can't turn down. So she leaves home secretly at night to travel to another planet. Aboard the ship she stands out, with her clay-covered skin that is the hallmark of her tribe, but she quickly makes friends. But just days before arriving at their destination the ship is infiltrated by a deadly enemy.

This is one of the most creative stories I've read, and I can't even compare it to any other scifi I know of. I loved some of the details of this story - for instance, Binti was essentially traveling through space in a giant shrimp. A shrimp! That was their ship! And I don't mean that the ship was made to look like a shrimp - I mean that it was an actual living creature and they were all inside it. WHAT. Also, Binti was super into math in a way that I barely comprehended, but that was one of her special gifts. Her people were very talented with technology, but she went beyond what was usual. She was considered a harmonizer, which had something to do with the way she understood and communicated with circuits and currents. The enemies that board the ship were also fascinating: jellyfish-like creatures called the Meduse who wreak havoc but are strangely unable to harm Binti.

I always appreciate books that are character-driven, and it makes it immensely happy to find character-driven science fiction. This was all about Binti and her experiences, hopes, and fears. As I mentioned it's a novella, but even at 90 pages there was a lot going on and a great deal of world-building. This is a planned trilogy, with the third installment due in January. Highly recommended!
Posted by 3goodrats at 9:18 AM