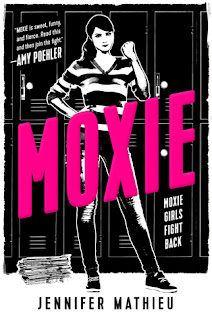 A teenaged girl in Texas is really fed up with the way girls are treated in her school, and the way the boys are allowed to act towards them. Vivian Carter has endured games of "bump-and-grab" which is exactly what it sounds like, boys constantly telling girls to "make me a sandwich" and wearing t-shirts that say things like "Great legs - when do they open?" It's not even so much that they are doing these things, but that they're getting away with it. But football is king at this high school, and the boys who play it get to do whatever they want. Vivian is inspired by her mother's collection of zines from her Riot Grrl days and stealthily begins her own, which she calls Moxie. And now the double-standard at her school becomes even more apparent.

Viv doesn't tell anyone that she is the girl behind Moxie, the one who is encouraging other girls to find solidarity and participate in protests. She doesn't know what her friends would think. Her new friend Lucy Hernandez is obviously on board with Moxie, but her BFF forever, Claudia, seems more unsure. Viv is accidentally discovered with copies of the zine by attractive new boy Seth Acosta, but he is an ally and keeps her secret. They start dating, which adds a new dimension to the whole situation and gives Viv hope that some boys are actually decent people.

This is not at all getting across the amazingness of this book. I loved everything about it! The complexities of feminism, and how Viv's efforts were received by girls of color, the acknowledgement of the importance of all-girl spaces, the realities of being a feminist while dating boys, who despite their best efforts are just not going to quite get it. I even loved Viv's mom, though I depressingly realized at one point that she is MY AGE. Which is exactly the problem with reading teen books when you're in your 40s, but I'm willing to deal with that because I'm not giving them up.

I first heard of this book because of a horrible, ridiculous review that appeared in Kirkus Reviews. I thought the review was stupid when I first read it because the criticisms just don't belong in a book review, but after actually reading the book I realize the reviewer wasn't even remotely correct. For instance, she criticized the story because boys weren't allowed to participate in the fight against misogyny, which has nothing to do with how well the book is written, not to mention that we are not, as a society, in agreement on that particular issue. But after reading it, it's clear that she's completely wrong about boys being left out - Seth clearly supported and participated in the actions and Vivian was happy to have his support. The reviewer also claims that the characters ignored due process, which, have you ever read a crime novel? And why is this a valid thing to cover in a review? Also, it's not entirely true and honestly, I could go on at length about the reasons why women do not go to the police every time we experience a sexual assault, but again, this subject doesn't belong in a book review. Anyhow, thank you Kirkus for drawing so much attention to this book that many people have now read, who maybe wouldn't even have heard of it had you not so grossly misrepresented it in your review.

Although I'd argue it's always the right time for feminism, I think right now is an especially good time for a book about girls speaking out about sexual harassment and assault. But it's also a great story full of likable and relatable characters, and it's fun! If you haven't read it yet, go grab yourself a copy right away!
Posted by 3goodrats at 10:23 AM