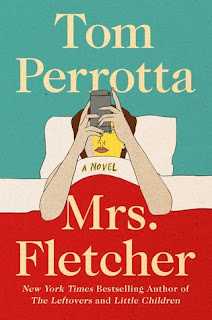 Brendan is another thing altogether. He annoyed me so much, and I kept picturing Tom Perrotta chuckling about Brendan's stupidity as though he was once just like Brendan (though I suspect he wasn't ever like Brendan.) I feel like we were supposed to be annoyed with Brendan but also write him off as young and stupid in a harmless way, but I don't find him - or any guys like him - to be harmless, and couldn't be amused by him. He even once used my most-hated, most-invalidating, male-tone-deaf statement, which is: "Don't be like that." (Does anyone else hate that phrase as much as I do?) He was an interesting character in a way, and he got his comeuppance but didn't actually care because he is so stupid he doesn't know what a jerk he is. I wanted him to grow up more during the course of the novel and develop more self-awareness. Don't get me wrong though; I still liked reading the parts of the story that were narrated by Brendan.

So that's not a criticism of the book AT ALL. My only criticism relates to a transgender character, Eve's class instructor. Margo Fairchild referred to her early life a couple of times saying things like "when I was a guy" and referencing how she "used to be man," which is not how trans people generally think about themselves. I mean, in her mind she was always a woman, right? But trans people are all different just as cis people are all different and it's not completely out of the realm of possibility that someone might speak this way. Just...I find it hard to believe that a trans woman who teaches a college class about gender would speak this way.

Otherwise, I loved this book. Tom Perrotta has never disappointed me. His stories and his style of writing are always a pleasure and and I'm only sad that now I'll have to wait another few years for another book.
Posted by 3goodrats at 7:47 AM