Fetch: How a Bad Dog Brought Me Home by Nicole Georges (2017) 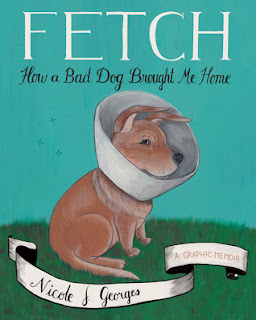 I don't really read "dog books." I'm sure I'm being unfair, but I always assume they are sentimental homages to the author's dearly departed pet. Plus, other people's dogs are apparently wonderful, loyal friends and mine is predominantly a whirlwind of biting and growling. So maybe it's just jealousy. But I saw this one on a list somewhere, and thought it was a book that could possibly make me feel better about having a bad dog, since it's about someone else with a bad dog. But to be honest I went into it with some skepticism.

I needn't have worried. This memoir is, indeed, about a bad dog and, rather satisfyingly, the dog doesn't magically become a wonderful, affectionate creature - rather, Nicole learns how to be Beija's companion in a way that minimizes the bad behavior and allows them to remain together. The relationship is fraught with difficulty. Unstable housing situations meant that Nicole had to make some major life changes from the beginning to accommodate her pet, such as moving in with her boyfriend when she was only 17. The difficulties were so severe a couple of times that Nicole even tried to rehome Beija. But over time, her situation became more stable, and so did her relationship with her dog.

Fetch isn't just a book about a dog, though, it's about Nicole's coming-of-age, her family, her relationships and sexuality, and her life in the 90s punk scene. All of this brought more depth and context to the story; Beija was the constant who stayed with Nicole through all the major changes in her early adulthood. 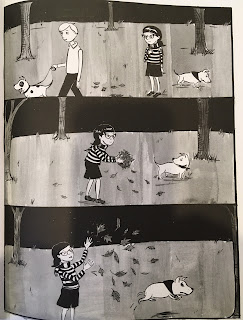 I like the style of illustrations, which of course is important in a graphic novel. Often, I can still get into it when the style isn't my kind of thing, but her illustrations were definitely the sort that I like. Her character drawings are fairly cute, but still convey a range of emotions. I liked looking at the art just as much as reading the story. In one two-page spread she's at the park observing a guy throwing up leaves in the air, his dog leaping in joy and playfulness. So Nicole tries the same thing with Beija, who just runs away in fear. I feel you, Nicole, I really do. My dog once barked in terror at a baked potato.

For some reason I haven't been picking up graphic novels as much recently; I'm even behind on Saga, which I love. Sometimes I think I just don't want to read that in format, though to be honest when I start reading one I always kind of forget that I'm reading a different format than I usually do, if that makes sense. At any rate, I'm glad I happened across this list of new-ish dog books and I'm glad I impulsively requested this through my library's network. I read it all in one day, which is really the best way to enjoy a graphic novel if you ask me. If you like stories about young people struggling through their 20s and trying to find their way in life, or appreciate stories about difficult pets, I do recommend this one.
Posted by 3goodrats at 10:57 AM