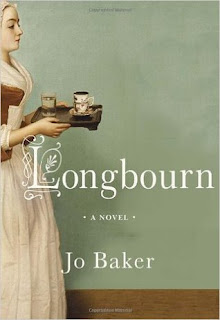 We've heard one story about lives of people who lived at Longbourn, that which was told in Jane Austen's Pride and Prejudice. Here, Jo Baker imagines another story, that which took place in the servants' quarters and stars the housekeeper Mrs. Hill and the maid Sarah. While all the Bennet girls are wrapped up in their social lives and getting of husbands, so is Sarah wrapped up in her own dramas and romances in between waiting on the Bennet family. This story begins with the arrival of a new footman, James Smith, who brings a bit of excitement and mystery to the household.

When James arrives the reader knows there is something up with him based on the reactions of other members of the household. But it quickly subsides and they get into a routine. You do eventually find out the mystery and it's a good one, but in the meantime it's not constantly dangled in front of you. It's just in the background, waiting, as other situations are unfolding more prominently. In the foreground Sarah is intrigued by James, but then her attention is drawn to Ptolemy, footman for Mr. Bingley whose presence comes and goes with his master's wooing of Jane Bennet.

Sarah is young and hasn't seen much of the world, but longs to experience more. Her impulsiveness leads her to some potentially reckless decisions, and I worried about her a bit. Though at the same time I was sort of rooting for her to break away from her job and just run away and follow her passions and find some excitement. Don't think any of this means that she's not responsible though. She's a hard worker and cares a lot about the other members of her household, especially the younger maid, Polly.

I loved the details of day-to-day living, as I always do in good historical fiction. I had to look some things up: black butter, chilblains, shoe roses. It's kind of fun to do that, and read a little about, say, the fashions of the time. And I always enjoy just getting a sense of what it was like to live in a certain period. I always know that what I'm getting is the experience of a particular social class, and this gave me the opportunity to make a direct comparison to another class (that of the Bennet's) in the same time and place, which was super interesting.

All the events are cleverly tied to events in Pride and Prejudice, which was neat if you're familiar with that story. But you don't have to have read it (or watched any of the adaptations) to enjoy this story because I think it holds up on its own. I can't help but compare and I will say I was surprised by the completely different perspective on certain characters, especially Mr. Collins. In the original he's rather a joke, but here, from Sarah's perspective, he's just trying to fit in with the upper classes to which he doesn't really belong. I loved that Baker views him from such a different angle than Austen did.

As much as I've been wanting to read this for quite a while, I was also a bit skeptical about reading a take-off on a classic, but I thoroughly enjoyed reading Longbourn. I recommend it to anyone who enjoys historical fiction and, of course, to fans of Pride and Prejudice. This is my fourth book from my 2018 TBR Pile Challenge, but I'm trying not to get too cocky about my progress since I haven't picked up any of my nonfiction books yet, and I think those will be the real challenge here.
Posted by 3goodrats at 9:08 AM