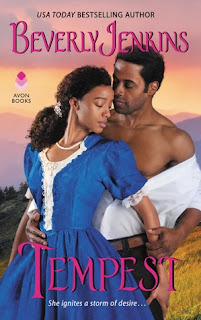 In this third and final book in the Old West series, Regan Carmichael leaves Arizona Territory for Wyoming to be a mail-order bride. During her first encounter with her husband-to-be she shoots him, so they're off to a pretty rocky start. (It was a misunderstanding, but still.) Dr. Colton Lee has been clear from the start that he's not looking for a love match, but only a mother for his daughter Anna. When he meets Regan he starts to have second thoughts, but remembers how difficult it was to find a woman willing to move to this wild land for him. So they carry on with their plan to get married and, of course, their marriage of convenience becomes something more.

Like in the last book, Breathless, there was very little angst between our hero and heroine, just a slow realization that they meant more to each other than they expected. When they first met, Colton was taken aback by Regan's outspokenness, her ability to use a gun, and the fact that she sometimes put on jeans and got dirty. His first wife, Adele, was traditional and ladylike, and it took him a while to get used to Regan. Oh, and Regan wasn't a virgin either, and she was honest about that. She and Colton had a great conversation in which it became clear that he thought sex is basically something that men desire but that women just provide. Regan schooled him on this topic pretty quickly.

But most of the tension in the story came from others in their town who made it difficult for Regan to settle in and feel at home. First and foremost was Colton's aunt Minnie who, up until now, had been a very big part of Anna's life. She was a strict, unkind woman who ruled by fear and discouraged Anna from having any sort of fun. Consequently, Anna was rather meek and afraid. Now that Regan was there, encouraging Anna to come out of her shell and be more confident (and get dirty!) Colton didn't want her around Minnie as much, especially when they learned that Minnie told Anna it was her fault that her mother died. Meanwhile, someone was threatening Regan's life, although it was unclear who or why. This family had some major hurdles to get over before they could really settle down.

As I know I've mentioned before, one of my favorite setups is a woman moving to a new place and setting up a life there. This had all of the elements that make that kind of story work for me. Regan is getting to know people in the town and trying to figure out who will be her friends. One of the first people she met and liked was Spring, Colton's sister, who was somewhat of an outcast in the town. But she was friendly and down-to-earth and the two became fast friends. Regan was also invited to a gathering of ladies in the town where the reception was a bit cooler. Some of the women were nice, and some were more stand-offish. It was a mixed-race group and it was clear that some of the white ladies weren't especially pleased with that. And of course there was a woman in town who had hoped that she would be the new Mrs. Lee.

I loved watching Regan settle into this town, develop a relationship with her new husband, and with his daughter. Colton was a country doctor who would treat anyone who needed it whether they could pay or not, so he was a bit financially strapped. Regan, however, came with her own financial independence which caused some heads to turn in the town when she began upgrading their kitchen so she could do some decent cooking and baking. The owner of the general store doubted her ability to pay for the items, and I loved watching her stand up for herself and buying the things she needed - and wanted - despite the judgement cast upon her from the townspeople. I also loved her relationship with Anna, who needed a mother like Regan and thrived in her company.

As with the other books in this series, I listened to the audiobook version which I pre-ordered so I could begin listening as soon as it was released. This one had the same narrator, Kim Staunton, who always has a pleasant easy voice that is enjoyable to listen to. I wish she hadn't tried to do the Chinese accents (and I think I had the same complaint about the last book) but those were just a few short parts and didn't really detract from the overall experience.

I've really enjoyed this series and I'm a little sad that it's over, but I know that Beverly Jenkins is a prolific author so there's lots more out there from her to read. One of her older books, Indigo, seems to be recommended everywhere, and I'm also interested in her Destiny series, one of which I think is about a lady pirate which, yes please. She also has a popular multi-book contemporary Christian series called Blessings, which isn't my jam but might be yours. I do encourage any romance reader who hasn't yet tried Beverly Jenkins to check her out.
Posted by 3goodrats at 9:24 AM