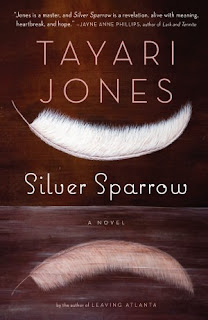 James Witherspoon is a bigamist. It's 1980s Atlanta and he balances his time between two families - the "legitimate" one and the secret one. In each family he has a teenaged daughter, each of whom in turn tells this story. The first half of the book is told by Dana, who has grown up knowing that her father has another family who he lives with most of the time, just stealing away regularly to visit Dana and her mother. Because his other daughter Chaurisse is around the same age, great pains were taken to make sure the girls didn't come into contact with each other and the sacrifice always had to be Dana's. In the second half of the book, the narration is from Chaurisse. Rather than getting the same story from another perspective, it picks up after the events of the first half, though we do get some back story as well.

I've been wanting to read this book since I first heard of it, soon after it was published. I'm not gonna lie, I was drawn to it because my father also had another family and I had never read anything about that kind of family situation before. This was a very different situation on the outside - these are black families in Atlanta as opposed to white families in rural Maine - but thematically it is the same and even took place in the 80s when I was also a teenager, though I think Dana and Chaurisse were a couple of years older than me.

The story is written in an easy conversational style that I really liked reading, and I think it would have teen appeal. I also really loved how 1980s it was - there was even a reference to George Burns in the Oh, God! movies, which I had completely forgotten about, so I had a nice moment of nostalgia there. Of course the meat of the novel is about the two related families and the man who ties them together. I like that Jones didn't paint James Witherspoon as a horrible person, just a flawed one, and didn't make either of his families more or less sympathetic. Everyone in this story is imperfect, but they feel real and their problems are no more or less dramatic than real life.

I found the ending a bit rushed, to be honest. There is a climactic event, shall we say, and it all wraps up pretty quickly after that. The second half of the book is told from Chaurisse's perspective, but the epilogue goes back to Dana and I wish it had been much longer. I want to know her motivations for doing things we learned she did from Chaurisse's story, and I wanted more about the emotional fallout from the events from both views. So my only criticism is that I wanted more, which means that I'll definitely be interested in reading more from this author.

Tayari Jones has a new book out, in fact, called American Marriage. It's very popular as it was picked as an Oprah book so I've already put myself on the wait list. I really like how Jones writes about unusual family situations so I think I'm really going to like the new book as well. As I mentioned, I first heard of Silver Sparrow several years ago, but I kept being reminded of it through recommendations such as this great list of 100 Books by Black Women Everyone Must Read. I put it on my 2018 TBR Pile Challenge and it's now the 3rd book from my challenge list that I've read so far this year.
Posted by 3goodrats at 8:17 AM

I recently read a book where the ending was rushed and I found it really disappointing. When I spend time reading 300 pages, I want a well-paced satisfying ending.