Hate To Want You 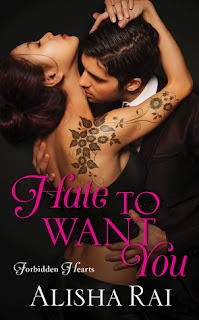 Livvy and Nicholas are descended from the Chandler and Kane families, who used to own a grocery store empire together. But when a tragic accident killed Livvy's father and Nicholas's mother - who were inexplicably in a car together that night - that came to an end. Nicholas's father forced Livvy's mother to take a buyout for her husband's half of the business, giving her a raw deal. Then the store burned down and Livvy's twin brother Jackson was implicated, though never charged. Nicholas's father told him he had to break up with Livvy. But for ten years, they continued to see each other in secret once a year, just for sex, no strings attached. Now that Livvy has returned to town temporarily to take care of her mother, all the old wounds threaten to open up again.

Livvy hasn't been back home in years, hasn't seen her twin brother in years, hasn't had a proper conversation with Nicholas since they broke up, despite their yearly sex date. As if the original tragedy weren't enough, Livvy's brother Paul - married to Livvy's best friend Sadia - died a year ago. There is a lot of tragedy in this story, a lot of suppressed emotions, and issues left undealt with for years.

Livvy's grandfather who co-founded the grocery store was Japanese and he ended up in an internment camp during World War II. During that time, all the family's valuables were held by the Chandler family. This history not only added more interest (not to mention ethnic diversity) but it added even more depth to the complicated relationship between the two families. The characters were also diverse in that Livvy's widowed sister-in-law is bisexual and her aunt's great love was also a woman, but neither of these are made a big deal, they are just mentioned casually in passing.

I haven't even mentioned Livvy and Nicholas's relationship itself. They once had a traditional relationship, but once they had to break up and got together only annually on Livvy's birthday for sex, they stayed emotionally detached. I mean, not really, but they didn't talk or anything. They always got together in a different city, wherever Livvy was at the time. She was a tattoo artist, and of course there's meaning behind each of her own tattoos, which we eventually find out about. Once they're in the same town again, it becomes very difficult to maintain the same sort of relationship, which of course is a great thing because they were both pretty miserable for that whole decade.

I heard about this book on Smart Bitches Trashy Books, which picked it for their book club a few months ago. I feel like it got a lot of buzz, so despite my general wariness of contemporary romance, I was very curious about it. I also heard a couple of interviews with the author on the same podcast and she is delightful, and has a great laugh that I could listen to all day. It surprised me in a couple of ways. For a romance this book is pretty dark, which I didn't expect, and I also didn't realize it was an erotic romance until I started reading it. It's sort of opposite of the light, funny historicals I'm used to. I think it's not exactly my jam, but it's undeniably good. The writing is solid, the emotional journeys of the characters feels genuine, and there's lots of interesting subject matter.
Posted by 3goodrats at 7:57 PM