Wrong To Need You 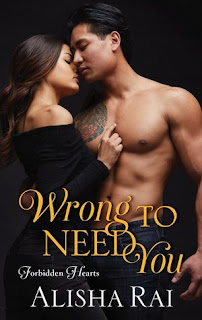 In the first book of the Forbidden Hearts series, we were introduced to the Kane and Chandler families and their intertwined history, and the tragedies that tore them apart. That story continues in this second book, but at the forefront, of course, is romance. After the tragic events that occurred ten years ago, Jackson Kane took off, a pariah in his community because of a crime he didn't even commit. Now he has returned and is working for his widowed sister-in-law Sadia Ahmed, but their feelings for each other are not of the sibling variety.

Sadia's husband (and Jackson's brother) died alone in the woods in a hiking accident. He shouldn't have been alone, but he and Sadia had recently separated, a secret she has kept to herself all this time. She inherited his cafe and is determined to keep the business afloat to support herself and her son, Kareem. She's not a businesswoman at heart, preferring instead her shifts at a local bar, but she is determined to keep going with her incredibly busy over-scheduled life. And then Jackson returns to town.

All these years, Sadia had emailed him regularly. They were good friends before she married his brother and missed him a ton while he was away. He missed a lot, including Kareem's birth and Paul's death, without explanation for his absence. Sadia is angry at him now, but also curious about what he's been doing and where he has been. It turns out that he is now a trained chef who has an international pop-up restaurant, and he's willing to fill in at the cafe now that Sadia's chef is gone. But his presence in the town dredges up old animosities and grudges, and as he and Sadia become closer, he considers maybe sticking around, but there's a lot that needs to be straightened out between his family and the Chandler family if he is to stay.

The tension between Sadia and Jackson is obvious - she feels like her relationship with him should be a family one, not romantic, since he's her brother-in-law. And she's still working through her feelings of guilt over her husband's death and their failed marriage. Plus Jackson has cut himself off from everyone for a long time, keeps to himself so much it's hard to get to know him, and it seems like he could bolt at any moment. He, of course, is still dealing with the fallout of being accused of arson so many years ago and though he knows he's innocent, there are some pretty dark secrets about the event that he has kept to himself all these years.

There is a darkness in these books, because of the family secrets and tragedies that everyone is dealing with, which is one of the reasons I liked the first book so much and that has carried through. Rai has done a great job of creating this family situation and, within it, contemporary romances that are challenging for reasons other than the hero and heroine's inner neuroses. The third book, Hurts To Love You, has just been released and I'll definitely be reading it at some point. I need to get to the bottom of all the secrets in the Kane and Chandler families!
Posted by 3goodrats at 8:01 PM