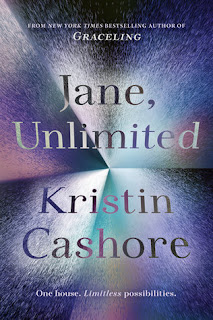 This is one of those books that I was highly anticipating, but then when it finally came out I somehow didn't get around to reading it. Then it kind of fell off my radar for a while until fairly recently when somebody mentioned it and my interest was renewed.

Jane is a young woman raised by her Aunt Magnolia after her parents were killed. Aunt Magnolia was a very adventurous photographer and has recently died on an Antarctic expedition. Jane is invited by her acquaintance Kiran to her family's mansion and Jane remembers her Aunt Magnolia making her promise that if she was ever invited to Tu Reviens, she'd go. Once there, she sees a number of suspicious happenings and tries to decide which to investigate. Here, the story splits into five different paths, each representing a different choice Jane makes at that juncture.

Cashore explains that the concept for the book was originally going to be an old-school straight-up Choose Your Own Adventure, but instead she chose one decision point and one story for each path chosen by Jane. This could have very easily fallen flat, but I'm happy to say that it worked for me and I enjoyed all of the stories. Ok, maybe some of them more than others, but each was compelling or entertaining in its own way. There were so many different things going on in that house, and each story delved into one part of it, though there was crossover to the other goings-on. Different characters featured in the stories too, so we got to know some of them better in some plotlines than in others.

I loved Jane and how she was at loose ends without her beloved Aunt, yet still an intrepid and curious explorer. She wanted to get to the bottom of the mysteries at Tu Reviens! Kiran's family, their staff, and friends were mysterious and quirky and Jane didn't know who to trust but she sallied forth and took risks that paid off. Jane was also an artist who made beautiful, inventive umbrellas. She was kind of attracted to Kiran's twin brother Ravi, but also kind of attracted to one of the house staff, Ivy. Soon after arriving at the house, she quickly developed a very close relationship with the resident basset hound, Jasper.

Altogether I found this novel to be a very fun surprise! It's quite different from Cashore's other books, which are also very good, but I think this one is more my cup of tea. Splitting off into different stories was risky and it could have been confusing to read, but it wasn't. Each story was different enough that I didn't find it hard to orient myself and keep the plot straight. I didn't want to put it down. I hope we don't have to wait too long for her next book, especially now that I've learned from this post that it takes place on a ship in the Arctic. It already sounds like my kind of book!
Posted by 3goodrats at 10:25 AM