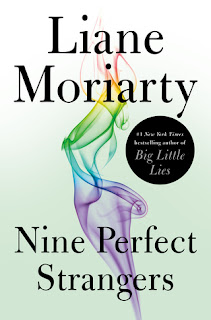 Nine people arrive at a health resort called Tranquillum House, hoping to change their lives, heal wounds, or lose weight. The methods promise to be unorthodox, but this group has no idea what's actually in store for them.

First we meet Frances, a romance novelist whose career seems to be on the wane and who has just been the victim of a scam artist. Next is Lars, a lawyer who makes a hobby of visiting health resorts like this one (well, not quite like this one.) Young couple Ben and Jessica won a lottery and it's destroying their lives. The Marconi family have suffered a loss they seem unable to recover from. Tony is a former athlete trying to deal with news he's just received about his health. Carmel is a stay-at-home mother of four whose husband left her and has remarried, and who is obsessed with her weight.

Then there's Yao, who we meet in the prologue when, as a paramedic, he is called to help a woman in distress. That woman is Masha, former corporate executive and now owner of Tranquillum House, where Yao now works.

The ten-day retreat begins as it always does. There's meditation, healthy food, a few days of complete silence. But then Masha introduces some experimental elements to the retreat, and things do not go as expected for anyone.

The story shifts between perspectives of all these many characters, which could have been confusing but isn't at all. They're not all represented equally - Frances is the predominant narrator here, with other characters' perspectives peppering the story. We get to know the first couple of characters before more are introduced, and this makes it easy to keep everyone straight. It also helps that they're all so different from each other.

I liked Frances a lot. Twice-divorced, being a romance novelist doesn't mean she's idealistic about love. She says early on "Once you knew everything there was to know about someone, you were generally ready to divorce them." Her most recent book didn't sell, and when she learned the man she was ready to move overseas for wasn't who he claimed to be, she decided she needed some help. A friend had visited Tranquillum House and highly recommended it. Frances decided to try it, though she wasn't completely sold on all the ideas. For instance, she snuck in some contraband wine and chocolate, which was immediately confiscated.

The Marconi family were Napoleon and Heather and their daughter Zoe. Her twin brother Zach had died just about three years ago, and none of them were dealing with it well. The parents were incredibly overprotective of Zoe now, and all three of them harbored guilt over Zach's death but didn't talk to each other about it.

Oh, and Masha had some pretty intense secrets of her own. Also, she is batshit crazy. All of the characters were compelling in their own way, and seeing them together in a situation that became rather desperate was the best part of this novel.

Even though Moriarty's books have dark, serious themes they are always so much fun! She creates such vivid characters and intriguing situations but she's also very funny. They're just a joy to read and this newest offering is no different. If you've enjoyed her other books, this is a must-read, but I'd also recommend it to someone trying her work for the first time.
Posted by 3goodrats at 7:14 AM