The Proposal by Jasmine Guillory (2018), narrated by Janina Edwards 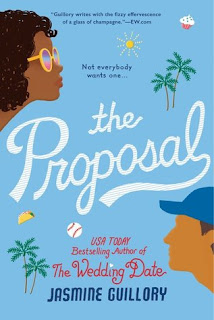 Jasmine Guillory busted into the romance scene earlier in the year with her debut, The Wedding Date, and already has a second book. The Proposal stars Carlos, best friend of The Wedding Date hero, Drew. His love interest is Nik, who he meets after she experiences a humiliating public marriage proposal at a Dodgers game in the opening scene. Nik was in a casual (she thought) relationship with a pretty actor who spelled her name wrong on the Jumbotron when proposing, and after she turned him down he stormed out. All eyes (and cameras) were on her until Carlos and his sister Angela helped her ditch the paparazzi and escape from the stadium. Nik invited them to have a drink with her friends, after which she and Carlos couldn't stop thinking about each other.

Nik, with the encourage of her best friends Dana and Courtney, decides that Carlos would be a great rebound. Happily, they agree to keep things casual because neither of them wants a relationship. Of course this is a romance so things don't stay casual, and that's the point of conflict for the novel.

Nik has a great group of best friends in Dana and Courtney, and when Nik begins receiving threatening texts from her now-ex boyfriend, they agree to take a self-defense class with her. This was a pretty excellent side story, especially when Nik, a journalist, decides to do a story on the owner of the gym. Plus they all loved the class, which made them feel strong and empowered, and - in one of my favorite scenes - Nik ended up putting her newfound fighting skills into action before the story was over.

Carlos had his own life stuff going on here as well. He's very close to his sister Angela and their cousin Jessica. Jessica is pregnant and has been prescribed bed rest because of problems with her pregnancy. Carlos is a doctor and really shouldn't be so anxious, but he is. He decides to buy her some reading material and runs into Nik at the book store; it turns out that just like Jessie she enjoys true crime, and she gives him some great book recommendations. Carlos feels like he has to take care of his family because his father is dead, and he also wants to keep Nik separate from them since they are only dating casually, and these both become points of contention.

I loved a lot of things about this book. Carlos is what Sarah from Smart Bitches would describe as "emotionally fluent" and I liked that about him. I also appreciate that the conflict wasn't based on the characters being stupidly neurotic or not having one conversation that would have fixed everything. It was about what happens when two people decide to keep their relationship casual and then start falling for each other, and one of those people in particular doesn't feel ready after their last romantic catastrophe. Carlos and Nik spent a lot of time eating delicious things, and it made me want to eat tacos and cupcakes and enchiladas (more than I already do) and I am generally just a big fan of food-prominent romances (see also: Bet Me, A Bollywood Affair, The Wedding Date.) I especially appreciated that Nik didn't scold herself for eating well or even feel guilty about it. Which brings me to...

Feminism. This book has it. So much. Everything from emotional abuse to why Carlos feels the need to be "the man in the family" now that his father is dead. One thing I appreciated a lot about his relationship with Nik was that neither of them was jealous or controlling, even in a "cute" sort of way like in some romances (and which I never actually find cute.) There was a great conversation about how ads and other media always portray women hiding their spending from their husbands ("Don't tell my husband I bought this! Haha!") as though it's a joke we're all in on and it's perfectly normal. One woman was in a relationship with a guy who retained tight control on their finances, but because she thought it was normal she remained in the relationship much longer than she should have. Those "don't tell my husband" comments have always irked me and I'm so glad it was addressed. Also, did I mention that Nik punched a guy who deserved it? That was very satisfying.

In summary, Jasmine Guillory is amazing and I will probably read anything she writes. I noticed that I gave this a higher rating on Goodreads than The Wedding Date, but that may have been my inconsistency and not that the previous book wasn't as good. I remember liking it a lot. Is it possible that this one was even better? Yes, maybe! If you like romance or chick lit or feminism or books with a lot of food in them I highly recommend checking this one out. The audio version was great too!
Posted by 3goodrats at 11:47 AM