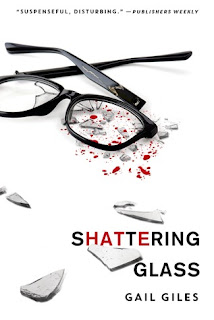 Here's my first read for the 2019 TBR Pile Challenge. Unlike most books on my list, this book has actually been sitting in a physical pile rather than just languishing on a list. A friend bought it for me, oh, several years ago now. I have no idea why it took me so long to read it. It's a short (just over 200 pages) teen book that I knew would be quick. And the premise was intriguing! So when mid-January came and I was panicking because I hadn't even begun a book for the challenge yet, this seemed like the perfect one to start with.

A group of high school boys, particularly a new student named Rob, are tired of this super-popular Lance guy being in charge. One day when Rob sees Lance picking on Simon Glass, a fat nerdy kid, he decides he's going to make Simon popular. He enlists his friends, including the story's narrator, Young Steward. We know from the beginning that Simon Glass ends up dead. The chapters all move forward in a linear manner, but each chapter begins with a quote from five years later that fills in a few details here and there until the story reaches the final deadly scene.

Some aspects of this story reminded me of Lord of the Flies. The way these kids aligned themselves and manipulated each other was cruel and dangerous and some, like Young Steward, weren't easy to categorize as good or bad. It was a chilling portrayal of human nature. Teenagers are especially vulnerable to the influence of someone who takes a strong leader role. At that age you're not experienced enough to know that someone like Rob is bad news, and of course you're trying to fit in with your friends and not risk being the victim of harassment and bullying yourself. This was easy to see in Young, who is told by another character, "You're everybody's idea of a 'good guy,' but you're not good because of any convictions or moral compass. You're good because you don't say no. You do as you're told and so far, nobody told you to do anything wrong...But someday, someone will."

It took me a bit to get into the book because the dialogue was awkward in spots and the character development wasn't as strong as it could be. For instance, Young disliked Simon from the beginning but didn't spend much time reflecting on why that is. Several of his friends had pretty interesting flaws that weren't really delved into, and in many ways I think a deeper exploration would have made a stronger story. On the other hand, it would have been longer and moved more slowly, and this is a book written for teens, not for middle-aged women. I can definitely see teens who aren't patient enough for a detailed plodding novel really enjoying this one. It's a quick easy read - I blew through it in a 24-hour period - but leaves you with a lot to think about.

Now that I've read the shortest, easiest book on my challenge list, it will only become more difficult. But I had a lot of books out of the library, plus an ARC I want to read before it's actually published, and now things are a little more manageable. I need to make a plan so I can be sure to read everything on my list this year (plus all the new books I have on hold from the library!) but I'm sure I can pull it off.
Posted by 3goodrats at 11:22 AM