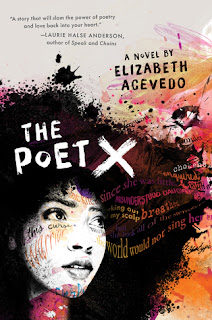 Xiomara writes poetry in a journal her twin brother bought her; poems about her family, the boy she likes, her doubts about religion. Her mother is extremely strict and is forcing Xiomara to attend confirmation classes, which meet at the same time as the poetry club she wishes she could attend. She is not supposed to have a boyfriend or go out dancing or do anything her mother sees as a sin. But she has been seeing a boy, Aman, even though her friend Caridad and her brother caution her about how much trouble she'll be in if her mother finds out. All of this is described in poetry, making this book quick to read and somewhat unusual.

I'm always hesitant to read books written in verse. I loved The Good Braider, but the verse form wasn't like reading poems. In this case, it really was like reading a series of poems, in slightly different forms, that all made up one story. It took me a while to get into, but I ended up liking it more than I initially thought I would. Of course it makes total sense that it's written as poems since that's how Xiomara expresses herself.

Her life epitomized the worst parts of being a teenager. She was just trying to live her life and do things she enjoyed, and her mother was always there trying to force her into this tiny little box of what she thought was appropriate. There were SO many rules and no room for any fun at all. Her mother really, really infuriated me. Why even have kids if you just want to make them miserable? This lady was so obsessed with God and following rules and not sinning that she didn't even seem to care that she was making her daughter miserable. She seemed intent on destroying any shred of happiness that Xiomara might have, which only made Xiomara hate her. How could she not see that's what she was doing?

Xiomara, though, is such a strong person! She's creative and expressive and alive! Sure she makes mistakes - we all do when we're young and that is how we learn - but she definitely knows her limits. She spends time with Aman even though she knows she's not supposed to, but they're just hanging out together and there is nothing wrong with teenagers making out, regardless of what Xiomara's mother thinks. She does end up lying to her mother and I don't blame her when she does. Her mother won't listen to her or what is important to her.

Everything about her complicated feelings towards religion resonated with me as I was also raised Catholic and forced to attend confirmation classes even though I wasn't the least bit interested in doing so. My mother was not the horrible person hers is, but she did force me to go to church which I honestly still don't understand. Forcing someone into religion doesn't make them believe it. Even Xiomara asking the priest challenging questions reminded me of my own behavior in confirmation classes. (Unlike her, I was actually kicked out. And unlike her I was still forced to go through confirmation.)

I loved that Xiomara got to experience poetry slams and really grow as a poet, despite the limitations her mother placed on her. Although there were some very painful moments as their conflict grew to a head, the novel ended with hope and some small steps forward in their relationship. Acevedo managed to fit a lot of story and feeling in very few words, which I suppose is how poetry works.
Posted by 3goodrats at 7:54 PM