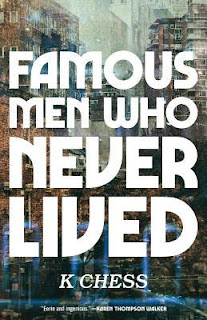 In 1910 there was a timeline split, resulting in two different versions of the United States. Recently in one of the timelines cataclysmic disaster struck, but 156,000 people managed to escape through a gate between timelines and now they are in the U.S. that we know. They were picked through a lottery, adults only, and they couldn't bring family members. One of those people was Hel, who left behind a young son and a career as a doctor. She now lives with a man named Vikram, who came through with only a backpack of books - books that don't exist in this timeline, except the copies he brought with him. One of them is The Pyronauts by Ezra Sleight. Hel reads it and becomes obsessed with the idea that it's the only copy left in existence, and that the man who wrote it in their world, here died as a child. She wants to build a museum of all the things the refugees brought with them from the alternate U.S. that don't otherwise exist here. She has a hard time convincing potential partners that it's a good idea, and then the precious copy of The Pyronauts goes missing.

I heard about this book through an email from the publisher that just contained a brief description and a link to request an advanced copy. I couldn't click fast enough. Often, books don't live up to the hype and I don't request many ARCs because I tend to only invest time in a book after hearing about it from reviews, and since this book isn't out until March I hadn't seen any reviews yet. I was just so intrigued by the premise, I wanted to get my hot little hands on it. Reader, it didn't disappoint.

Three years after arriving the refugees are still trying to assimilate, to forget everything they left behind and will never see again, to rebuild their lives. They're unsettled and unsure and they're all going through the experience in their own way. Some, like Hel, won't even consider trying to rebuild a life anything like her former one. She could be a doctor here too, but she doesn't want to. She won't deal with the loss of her son, or the fact that she chose to leave when he could not. What do you do in this situation? How do you live?

This is a story about refugees, which means there is another aspect to the story. Many people from this world don't trust the newcomers, and don't want to know anything about where they came from or their previous lives. They just want them to fit in, adopt our way of living and speaking and behaving so they can pretend we're all just the same. The UDPs - Universally Displaced Persons - know it too, and there are rumors about people being rounded up in camps. They know they're not treated the same, that many people are suspicious of them.

There were so many little things that illustrated the difficulties faced by the UDPs. For instance, the world they came from had no Nazis, so swastikas retained an older meaning. One UDP had a swastika tattoo on his neck, for luck, but was ostracized for it until he realized what it means here and he removed it as best he could. When one UDP realized how little people here bothered to learn about her world, she started making up outrageous lies about lives and customs in the alternate world and people believed her. I was fascinated by all the ways people dealt with this impossible situation.

What if you were a refugee from a place you could never go back to because it no longer exists? And where you are now, it never existed. You can't turn on the news and find out if everyone there died of radiation or if some people escaped. You can't even find out if anyone you know also made it through the gate because that would mean letting the government make a directory of all UDPs, and that could be the first step in tracking you all and being able to easily round you up if needed.

This book poses so many questions, and gave me a lot to think about. I suspect it may haunt me for a while.

I received my copy of Famous Men Who Never Lived courtesy of the publisher. I was not compensated for this review.
Posted by 3goodrats at 9:19 AM