My One and Only Duke 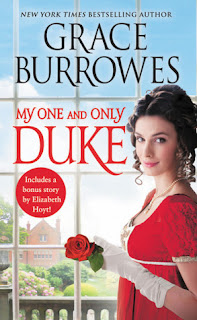 Quinn Wentworth is a successful banker who is about to be hung for a crime he didn't commit. While biding his time in Newgate Prison, he meets a minister's daughter, widowed and pregnant. He decides to help her out by marrying her so she'll inherit his money, giving her means to raise her child. Meanwhile, authorities are trying to identify the heir to a dukedom and lo, it turns out to be Quinn. His execution is stayed at the last moment - really, after the last moment as technically he had been hung but just hadn't died yet. So now he's alive! And married!

I thought this was all a great premise to begin with, but of course there's more to it. Quinn wants to know who set him up, Jane has to adjust to the Wentworth household that she never expected to be a part of, and her father is threatening her child's future. There is a lot to be resolved.

Quinn tries to give her an out if she needs it, but Jane is committed to staying married. The truth is, they do like each other quite a bit even though they didn't get to know each other very well while she was visiting the prison. They vow to be honest to each other, but they're already lying: Quinn doesn't want Jane to know about his plan to find out who framed him and take revenge, and Jane doesn't want Quinn to know that her father is planning to take the baby away and raise it himself. (Oh, and her dad may be a minister, but he is bad news and not fit to raise a child.) They both have messy histories, which is something I appreciated a lot about this book. Not only is the heroine not a virgin (I mean, obviously, since she's pregnant) but her marriage was a series of poor choices and I really liked that even though it wasn't great and her husband wasn't a great choice, neither was he awful. Quinn's sexual history is also complicated and shameful to him and he wants to keep it a secret from Jane.

I also really enjoyed Quinn's sisters. They were all born poor, but through luck and good investments their position was much improved. However, Althea and Constance are not genteel tea-drinking ladies, they drink gin and curse and don't act demure for even a second. Quinn finds them difficult to live with but they are just the kind of fierce women you want on your side.

Basically I found everything about this to be rather delightful, despite the poorly-photoshopped cover. I had read some good reviews of it and hadn't read this author before, so I thought I'd try it. It was fun, and just the thing I needed after reading so much heavy scifi and horror recently.
Posted by 3goodrats at 12:05 PM

Labels: books, fiction, grace burrowes, my one and only duke, reviews, rogues to riches, romance