The Everlasting Rose (The Belles #2) by Dhonielle Clayton (2019) 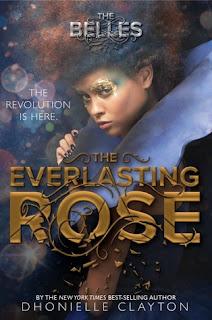 I've been dying for the release of this book since I finished The Belles back in January. When the last book ended Camille was on the run - the Queen was dead, Princess Sophia was trying to claim the throne and Princess Charlotte, who was the rightful heir, was missing. Charlotte had recently awoken from her deep sleep, thanks to Camille who had also discovered that the cause wasn't a mysterious illness after all, but poison administered by her sister Sophia. Now, Camille is in a race against time to find Princess Charlotte and return her to the palace to claim the throne.

Princess Sophia claims that her sister is dead, and she's preparing for the funeral and her own coronation. She's also offering rewards for the return of Camille, her sister Edel, and the guard Remy who has been helping him. Camille and Edel use newfound powers to disguise themselves as they move around, but still they must be careful. When they learn of an underground resistance run by a group called the Iron Ladies they wonder if maybe they'll have help.

I really liked revisiting this world and spending more time with Camille and her sisters. While trying to locate Princess Charlotte, Camille was also trying to find her Belle sisters who had been moved to different locations. She was very worried for their safety, especially as she learned more about Princess Sophia's dark plan for the Belles once she was officially Queen. If the Belles were treated like chattel before, now they would be treated even worse. Camille also has a new romantic interest in the guard Remy, who she used to dislike but is now getting to know much better.

It was also great to see more of the world introduced in The Belles. I was especially interested in the Iron Ladies, who didn't partake in the beauty rituals everyone else did, using only basic maintenance to dull the red in their eyes and make their straw-textured hair easier to deal with. One of the other symptoms was described as mental unbalance though, and that wasn't addressed here. I don't know if it's an omission or something that will be a addressed in a potential third book. Honestly, there were a few bits in this book that didn't quite make sense or were awkward. And then there was the impulsiveness of Camille, wanting to run after her friends who were captured though she obviously didn't stand a chance of saving them. But she's a teenager, so that is just a part of her personality I think. One of her hot-headed impulsive actions created a needed diversion though, which is obviously good, but I wasn't sure whether or not it was planned. Camille is fairly unpredictable and her instincts aren't always on point.

At any rate, these were minor issues in a book that was overall pretty action-packed and difficult to put down. I loved spending more time in this world and with these characters. I can't tell if there's going to be a third book, because although there's more that I want, things were fairly resolved in the end. But I'm hoping this series isn't over!
Posted by 3goodrats at 8:12 AM