Leah on the Offbeat

Leah on the Offbeat by Becky Albertalli (2018), narrated by Shannon Purser 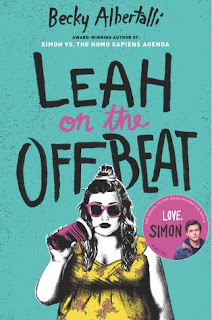 Leah is a good friend of Simon from Simon vs. the Homo Sapiens Agenda. She's a drummer in an all-girl band, daughter of a young single mom, and bisexual but not out to anyone except her mom. It's senior year and everyone is applying to colleges and getting ready for prom and the stress of impending life changes is causing a lot of drama. In the midst of it all, Leah is getting some confusing signals from someone she's had a crush on for a long time.

Simon and his boyfriend are both looking at colleges in New York, but things are getting rocky with their friend Nick and his girlfriend Abby who won't be going to school near each other and have to figure out whether or not they can do a long-distance relationship. Abby and Leah are going to the same school, and their friend Morgan didn't get in and implies that Abby only got in because she's black. Leah calls her out for being racist, and her friend group fractures a bit. Also, prom is coming up and you know there will be a lot of drama there. So much drama.

Beck Albertalli manages to create characters that encompass the very best things about teenagers while keeping them genuinely teenager-y. Leah was being pursued by a guy who really liked her and she kept leading him on, not intentionally, but as an adult it was very easy to see it happening. She was also pretty mean about her mom's new boyfriend. Her mom was pretty young, in her mid-30s, and Leah kept going on about how old Wells is. Turns out he's 42. Which, for the record, is a few years young than I am so THANKS, LEAH.

At the same time, I couldn't help but like her. She was just trying to figure things out and basically a pretty good person, and interesting - she was a great drummer and a talented artist. She also stood up for Abby even though it adversely affected her friendship with Morgan. Some of her friends thought she should let the racist comment go, making excuses for Morgan because she was just stressed about being rejected. But Leah knew it wasn't right and was determined to set the record straight about Abby, who was very smart and earned her admission to that college. And yeah, she wasn't clear to Garrett that she only liked him as a friend, but navigating those maybe-friends-maybe-more kind of situations are confusing even as adults, so I totally understand why she kind of bumbled her way through this whole Garrett thing. After all, she did like him, and it's not always super clear even to yourself how much you might like someone or in what way. Especially when you're a teenager with zero relationship experience.

I listened to the audio and I thought the narrator had the perfect voice for Leah. This is not a perky, upbeat, sunny character but a very down-to-earth, deadpan, dry humor kind of person and Shannon Purser captured that perfectly. In contrast to my last couple of audiobooks, I finished this one within a week, which is one of the things I love about teen books. I haven't read many of them recently, but this was just exactly what I needed right now. It was so much fun spending time with Leah and her friends as they prepared to finish high school and start the next phase of their lives.
Posted by 3goodrats at 9:19 AM