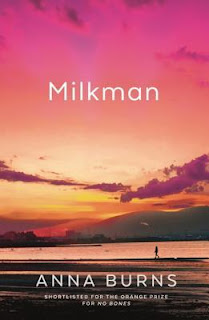 Descriptions of this book are vague and I hadn't read much about it before a friend gave me a copy, but somehow I thought it was a dystopia. However, about 60 pages in it says the events take place in the 1970s and I realized it was taking place in Northern Ireland during the Troubles. It took me this long to figure out because everything in this book is vague and unnamed, including the characters, and the writing style is what I've been charitably referring to as "literary." The sentences are long and rambling with many clauses and commas, the wording can be strange, the paragraphs sometimes go on for pages, and the chapters are very long as well, only seven in the whole book. It's not easy to read.

Our protagonist is a young woman known only as "middle sister" and she is being pursued by an older paramilitary man in whom she is not interested. He's called Milkman and regardless of her disinterest, it's gotten around that she's having an affair with him. She barely knows him but he knows a lot about her, and now she is aware of every move she makes and the fact that he will know about it. She has a boyfriend, "maybe-boyfriend," and she now worries for his safety because Milkman has made vague threats about car bombs. Middle sister lives with her mother and "wee sisters" and she has a job that I don't think is ever actually described and she takes a French class some evenings. She is also known for walking a lot, and reading while she walks. In addition to Milkman, a guy named Somebody McSomebody is also seemingly pursuing her. He's from an unfortunate family in which most of his siblings have been killed for political reasons. One of her own brothers has been killed too, as well as her oldest sister's former boyfriend. There's a theme about people ending up in the wrong relationships, the people they really truly loved either dead or otherwise out of their reach. This is true for eldest sister who is now married to the disliked first brother-in-law.

Middle sister is narrated in the first person so we are privy to all her thoughts and perceptions, and her mind is kind of a weird place to be. Because of the political situation and her desire not to be involved, she is rather shut down and emotionless. I also got the impression that she was just trying to get through each day avoiding trouble and that was pretty much it. Despite her apparent interest in literature, she wasn't exactly deep or thoughtful or observant of the world around her. There's a bit where maybe-boyfriend takes her to see a sunset and she is confused about why this is a thing you'd do, and then a couple of weeks later in her evening French class the instructor has the class look out at the sunset and discuss all the colors they see. It seems that none of them have ever actually looked at a sunset before.

The language makes everything seem even more strange, which is why I think it was set in some fictional world when I started. I mentioned that the the sentences are long and rambling and oddly-worded and that definitely adds to it. When she talks about her relationship with maybe-boyfriend she says, "Under stress we were starting to fight and were communicating less with each other than the normal amount of sharing of ourselves that we didn't tend to communicate before." This is fairly typical of the wording, though a comparatively short sentence - I won't burden you with reading one of the long, complicated sentences. There were times that by the time I got to the end of a sentence I couldn't remember how it started.

Honestly I didn't think I was going to make it through this book. Had it not been a gift, I probably would have given up 50 or so pages in. As it was, I kept going and felt like it was a slog but it started getting much better once I got oriented about where and when it took place and had a better idea of what was going on. By halfway through or so, I was warming up to it and by the time I finished I would call it a pretty solid like. Reading it was work, but underneath the difficult style - which also grew on me until I rather liked it - it was actually a pretty great story.
Posted by 3goodrats at 10:17 AM