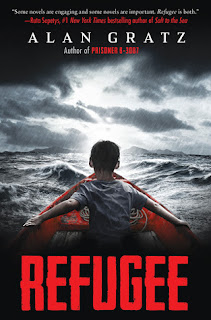 I don't especially like middle grade books, but this is our pick for the Community Read at my library this year. While I'm no longer on the committee, I still offered to run a book discussion so I had to read the book!

There are three different stories. One is of Josef, a Jewish boy trying to escape Hitler's Germany during World War II. His father was taken to a concentration camp and when he was released the family left on a ship headed for Cuba. But they weren't the only ones - two other boats were also headed there for Germany, and it was uncertain whether or not they'd be allowed to disembark once they got there.

Isabel lived in Cuba in the 1990s and her father was involved in a protest. The police were after him, so the family convinced their neighbors to take them on the boat they had been building. It was a pretty makeshift boat, but it was all they had. The two families headed out, bound for the Florida coast.

Finally, Mahmoud lived with his family in Syria until the day in 2015 that their building was bombed. They left Aleppo in their car, hoping to drive as far as possible and then find transport the rest of the way to Germany. They encountered dangers and obstacles all along the way, and spent time living in refugee camp and in an abandoned mall.

These stories had a common thread of course, and that was escape. In all these stories the families were at great risk and they didn't all make it to their destinations. All were desperate and needed help along the way and sometimes they were lucky to find kind strangers. These are horrible experiences for anyone to go through, but especially children, and it happens every day. It's all too easy to hear stories about refugees on the news and not think much about it, but stories like these put real faces and real people in the news stories. Although it's a work of fiction, they're based on real situations and some of the characters are based on people who actually lived. It's terrible to think of what families like Isabel's can go through to get to the United States and then think about people who just want to build a wall to keep them out. Why would anyone want other humans to die just because they weren't lucky enough to have been born somewhere safe that remains safe?

The book was written in alternating chapters, which I didn't like at all. I don't mind when a story is told from different perspectives, but this was actually three different stories and organizing it like that felt like I was reading three different books at once, four or five pages at a time. It made it difficult to get into any of the stories. So pretty early on, I decide to just read all of Josef's chapters in a row, then Isabel's, then Mahmoud's. This gave me the opportunity to get more into the stories, which was a better experience for me.

All in all, they were pretty decent stories and I flew through them, reading the whole book in one (albeit long) evening. They were fairly simple as they were written for young people, but didn't shy away from tragedy. And there was some pretty painful tragedy. I know that this year the committee wanted to find a book about immigration and I think this was a great one to highlight the different kinds of experiences people have when fleeing their countries, and of course, the reasons they need to leave in the first place. It's a good jumping off point for discussions and programs around immigration and I'm very curious to hear what other readers think about it.
Posted by 3goodrats at 9:01 AM