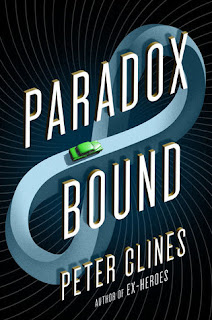 In the town of Sanders, Maine an eight-year-old boy named Eli has an encounter with a mysterious woman wearing a tricorn hat and driving an old Ford Model A. He sees her again when he's 13. But when he next meets her as an adult, it's followed later by a visit from a faceless man. He asks Eli about the woman, forcing him to give answers about where she was headed, so Eli decides to head to Boston to warn her. He soon learns that the woman, Harry, is a searcher traveling throughout history looking for a literal incarnation of the American dream and that the dangerous faceless men are after her. Eli ends up hopping aboard the Model A with Harry and joining the dangerous search.

Honestly, it's so hard to describe this book because it sounds kind of ridiculous, but believe me when I say it's worth reading. I've been a fan of Peter Clines since I read 14 and he hasn't disappointed me yet. I don't actually want to go into too much detail because half the fun is figuring out what the hell it's all about as you go along. And I wasn't super clear on a lot of it, to be honest. I didn't understand what form the dream took - was it an actual object? And Harry was very particular in saying that she traveled through history, not through time, and correct Eli if he referenced time travel. I'm not sure of the difference. But none of this really matters, and it didn't make the story confusing for me.

Sanders was sort of a sleepy little town that hadn't completely caught up with the modern day, and Eli had lived there all his life so far. I think he was 29 when he leaves to travel with Harry. He always wanted to get out of his town but never quite got motivated. His childhood bully, Zeke, grew up to be a cop which can't have made things easier. He also had a relationship go South recently, so his life situation was pretty perfect for a grand adventure. As much as Eli was sort of obsessed with Harry, it wasn't a romantic thing, for which I am grateful. But they were a great duo as they traveled through history searching for the dream, encountering some famous actual people from history, and evading the creepy faceless men.

This is a page-turning adventure that moves quickly, but not so quickly that there's not good character development. It's very well thought out and well-crafted, which is exactly what I've come to expect from Peter Clines. The fact that a town in Maine features so prominently led me to look him up and discover that he is, in fact, originally from Maine. Turns out he has worked as a props master on Veronica Mars, which I am currently rewatching and somewhat obsessed with. Worlds collide.

Paradox Bound is on my 2019 TBR Pile Challenge, which I am almost ashamed to admit since he's an author I always read now so I don't know why it took me so long to get to this one. It was fun and entertaining and unexpected and strange. I've never read a story quite like it. I think I've said that about his other books too. As always, I'm very much looking forward to seeing what he writes next.
Posted by 3goodrats at 9:53 AM