Nicholas and Alexandra: The Fall of the Romanov Dynasty by Robert K. Massie (1967) 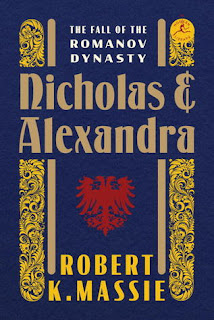 Nicholas II was the last tsar of Russia before the revolution, and in this classic book by Robert K. Massie, he tells the strange and dramatic story of this last generation of the Romanov family and their downfall. Nicholas and Alexandra had five children, the youngest of whom, being male, was the heir to the throne. He suffered from hemophilia (inherited from his maternal grandmother, Queen Victoria) so his family was extremely protective of him. Part of that was a close relationship that developed between the family and Rasputin, who they believed to be a holy man who performed miracles of health on their sick son. But this relationship with Rasputin only exacerbated the growing distrust of the royal family by the public, feeding the flames of the revolution to come until the government was dissolved, Nicholas forced to abdicate, and the entire family was murdered in a cellar in 1918. Spoiler alert.

This is a detailed account that took me more than two weeks to read and I'm not gonna lie - it was a little tough to get through. All of the parts that focused on the family and their domestic life and their friendships with Anna Vyrubova and Rasputin were easy to read, but there's necessarily a lot of politics and details about World War I and that was harder. It was also difficult to keep track of all the different people involved in the government, especially since some of them had similar names. So in this way it wasn't quite as compelling as Massie's Catherine the Great, which I read a little over a year ago. But still, it was quite a story!

What really stands out from all the drama of the last Romanovs is, of course, Rasputin. A peasant who passed himself off as a holy man, he was this unwashed weirdo who would just go up to women and start unbuttoning their clothes. Many women had affairs with him, but he was also accused of attempted rape many times. (The police did not take action.) Despite his known drunken and violent tendencies, he presented a completely different character to the royal family and the Alexandra specifically was very devoted to him. When World War I began and Nicholas was away at the front, she handled some government affairs, always on the advice of Rasputin. He earned her trust when Alexei was sick and seemed to get better with Rasputin at his side. There were a number of times when he seemed to have this effect or when his predictions appeared to come true.

I'm not certain how Massie determined the truth of Rasputin's predictions. I looked in the back of the book at the citations for one instance, and it was from the account of Anna Vyrubova, herself a very loyal friend of Rasputin and hardly an unbiased observer. Perhaps it's true that certain prophecies of his did come to pass, but I have to wonder how many prophecies he made all together. If he made 1000 prophecies and we're only talking about the 10 that came true, those can probably be chalked up to coincidence. But I don't have the information to really know. However, what seems certain is that Rasputin was one creepy dude and the fact that he had to be poisoned, shot several times, AND drowned before he actually died only adds to his creepiness. It was also clear that he was manipulative, as one of his prophecies to the Empress was "If I die or you desert me, you will lose your son and your crown within six months." No wonder she kept him around. (This particular prophecy came true, too.)

As for the family itself, I mostly felt bad for them. They were born into this life (or in Alexandra's case, married into it) and Nicholas was not a terrible ruler. He did the best he could. Of course the children were all just victims. When they were murdered the oldest daughter was twenty-two and Alexei was not quite fourteen. Despite being born into wealth he had a very hard life. He wasn't allowed to run and play the way other kids were (he always forbidden to ride a bike, which he really wanted to do) because of the risk of injury. And when he did manage to hurt himself, he'd be in bed in terrible pain for days at a time, or even weeks. Even though I knew how their lives ended, as I was reading I kept hoping they'd escape and leave Russia to start a new life. None of them were bad people. Alexandra was the worst, and she was more misguided than actually a bad person.

All in all, it seemed a very thorough account of a significant family and period in history. The only thing that really bugged me was how all the names were westernized. Alexei was referred to as Alexis, for example, and Kaiser Wilhelm of Germany was called Kaiser William which really confused me for a while. I had to look up "Kaiser William" to see if that was a person. I'm guessing this must have just been a convention at the time this book was written.

As I said, I didn't love this one as much as Catherine the Great, but it was still quite good. I had already read The Family Romanov by Candace Fleming, which was excellent but it was written for teens and was much shorter. Now having read Nicholas and Alexander, it only affirms my opinion of what a good job Fleming did in condensing the story down into a shorter book, but of course there was a lot that was left out. (I just knew there was more to Rasputin's sketchy character than she told us about, for example.) It's altogether a fascinating story, and Robert K. Massie told it well.
Posted by 3goodrats at 6:15 PM