This Is Not Your City

This Is Not Your City by Caitlin Horrocks (2011) 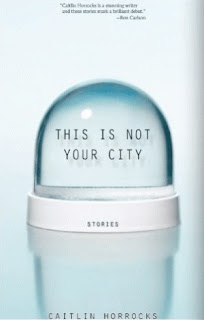 Ok, I know I told you that Vampires in the Lemon Grove was really good, but I think this short story collection is even better. It all started several years ago when a coworker told me how good the 2011 edition of The Best American Short Stories is. I read it and agreed (though I had no basis for comparison, not having read any other editions.) My favorite story in the collection was "The Sleep" by Caitlin Horrocks, who I had never heard of before. I told everyone about that story and I kept thinking about it. Recently - a full seven years after reading it the first time - I finally read it again. I still love it. So I looked for more by this author and found this book.

It starts strong with "Zolaria," an unusual telling of childhood friendship and imagination in which the narrator speaks in future tense of later events, her best friend Hanna's devastating illness and her own marriage. The second story - probably my favorite - is called "It Looks Like This." It's a school assignment written by a girl who had to drop out to take care of my mother who has rheumatoid arthritis and can no longer use her hands. The assignment may be enough to allow her to graduate and she tries to fill it with knowledge she remembers from class and related skills she uses in her life, such as the geometry required to sew quilts. She also talks about her friendship, if it is in fact a friendship, with a young Amish neighbor. I love the narrative voice, the honest and earnestness of this character, her inclusion of maps and photos, and the way she accepts that she'll be spending the next several decades devoted to taking care of her mother.

"Zero Conditional" is about a teacher who is cruel to her students, and it sneaks up on you because she seems so reasonable until then. Even more upsetting was "Steal Small," probably the most unpleasant story in the bunch because it's about a couple who procure dogs and make money off them, and you just know that whatever happens to the dog isn't good, and this is confirmed. I can't stand animal cruelty, but I have to admit the story was effective and well-written. Speaking of stories that are disturbing, in "Embodied" the protagonist claims to be on her 127th life and she starts recognizing people from previous lives and she has a baby who died and when you learn the whole story about that it is just shocking and bizarre.

The title story is about a woman who has married through a matchmaking service, leaving Russia with her teenage daughter to start a new life. They are in Finland now (also the setting for "Going to Estonia") and the daughter goes out with boyfriend and doesn't return. His family reports them as missing, and the woman needs her new husband to talk to the police for her since she doesn't speak Finnish. It's a tragic story, but not in the way you expect. The final story, "In the Gulf of Aden, Past the Cape of Guardafui" is also a sad family story, but in a different way. A couple is traveling and they meet other people and tell them about their kid, except they tell different stories each time. We don't know until late in the story why they are lying. In the meantime their cruise ship is hijacked by pirates. This couple really needs a break.

Many of the stories involve travel, which means the characters are out of their elements, lending a feeling of alienation. They are not as strange or bizarre as many short stories tend to be, focused instead on relationships and tragedy. I also feel like they are somehow not as literary as most short stories I've read and no, I can't really explain what I mean by that but it's definitely a compliment.

This is not an especially well-known collection of stories and in fact is only owned by a few libraries in my network. But I believe it deserves a wider audience, and I look forward to more stories by Horrocks.
Posted by 3goodrats at 7:40 PM

Labels: books, caitlin horrocks, fiction, reviews, short stories, this is not your city