Vampires in the Lemon Grove

Vampires in the Lemon Grove by Karen Russell (2013) 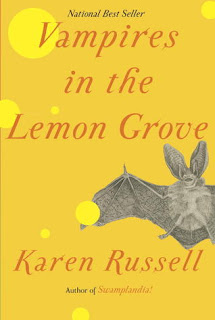 This was sort of an impulse checkout from the library. I wanted to read short stories, and I specifically wanted to read Her Body and Other Parties by Carmen Maria Machado, but the library copy was in disgusting condition so I sent it to mending instead. Since I don't read many short stories I didn't have another collection on my To Read list, but over the years I've heard repeatedly how good this one is, so I grabbed it.

Karen Russell became known several years ago with Swamplandia!, a book I still have no interest in reading, but I thought stories would be more manageable because I could just try one or two and then stop if I didn't like them. But I kept going because these stories are pretty great.

The title story is exactly what it sounds like - it's about a couple of vampires who hang out in a lemon grove because they feed on lemons instead of the blood of people. To be honest, I didn't quite understand this story when all was said and done so it wasn't my favorite. More interesting, and weirder, was "Reeling For the Empire" in which girls in Japan are taken from their homes and turned into human versions of silkworms. Their bellies expand with the silk they need to release from their fingertips in an endless daily cycle. It was horrific. In "Proving Up" homesteaders in Nebraska await an inspector who will hopefully legalize their claims, but they don't all have the required glass window, so a teenage boy is tasked with delivering the one window to various households in turn, but he gets caught in a freak storm. Possibly my favorite in the collection was "The Barn at the End of Our Term," in which several former U.S. Presidents are reincarnated as horses who all end up on the same farm. It was bizarre and amusing. Where the hell does she get these crazy ideas?

Although I liked some more than others, there really wasn't a dud in the bunch. Probably my least favorite was the final story, "The Graveless Doll of Eric Mutis," which was still a good story but it was about a bunch of bully kids and a scarecrow and I don't like bullies or scarecrow. Also there was a rabbit that I was worried about because I don't like when people mistreat animals.