Catherine the Great: Portrait of a Woman by Robert K. Massie (2011) 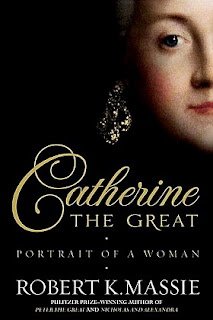 When she was just 14, Princess Sophia of Anhalt-Zerbst was summoned to Russia to become the wife of the Grand Duke Peter, heir to the throne. They were married, and Sophia converted to Russian Orthodox Church and her name was changed to Catherine. The marriage was unhappy, but Catherine took advantage of every opportunity to educate herself in hopes of someday becoming Empress.

Peter was the one destined for the throne, of course, and although he was interested in power, he wasn't a skilled leader. Obsessed with toy soldiers into adulthood, he wore a Prussian uniform as he always stayed loyal to his native country rather than to Russia. He was immature, short-sighted, and had a terrible temper. His reign was brief.

Catherine was well suited to being a ruler. Intelligent and even-tempered, she had gained admirers, slowly building support until she needed it to take the throne. She admired Enlightenment thinkers such as Voltaire, with whom she enjoyed a long-distance friendship, and used these ideas to move Russia towards a more European model that embraced the arts and culture. She cultivated relationships in a way her hot-headed husband never would have been able to.

She had many lovers over the years, who helped her produce the heirs she needed. Her marriage to Peter remained unconsummated for nine years, though the book honestly doesn't make it clear if and when it was ever consummated. Whether or not her son Paul was Peter's son has not been determined, but Massie posits that she took her first lover in order to produce a needed heir and that Paul was a result of this liaison.

I found so much to admire in this woman, and was foremost struck by how readily she was accepted as a ruler in the 18th century. Obviously there have been female rulers going far back in history, but I've always gotten the impression they were anomalies. Catherine directly followed Elizabeth, who came not long after Anne, and there was no mention of anyone taking exception to women ruling Russia (though late in the book I learned that after her reign, the rules of succession were changed and the Emperor or Empress could no longer name their own successor; the throne was automatically passed to a male heir.) It just made me think a lot about the way we view female leadership as something new and untried.

Some of Catherine's views would be unpopular today, such as her firm belief in the autocracy and hesitation in abolishing serfdom. As much as she admired certain progressive reforms in Europe, she remained fully committed to a benevolent autocracy. And while she tried some reforms to ameliorate conditions of the many serfs in Russia, she balked at the idea of doing away with the whole system. To some extent she knew what would and would not be possible in the the political climate of the day, but she also remained steadfast in some of her beliefs. She did at one point bring together a large body of representatives from all classes in all parts of Russia in an ambitious attempt to rewrite the entire code of laws, but with limited success. From this experience she learned how much more efficient decision-making is when there's just one person doing it.

During her reign she faced and overcame some major challenges. In one instance, that became known as Pugachev's Rebellion, a man claimed to be Catherine's deceased husband, rightful heir to the throne, and despite the fact that he was obviously not Peter, gained enough support that Catherine had to devote energy and resources to quashing the movement. She also had to contend with a deadly outbreak of smallpox, which she faced with the then-bold solution of vaccinations. And of course there were the various wars she had to oversee and contend with, and these were the parts I most struggled with. I always have a tough time reading about political situations, because it's all names and dates and abstract concepts that are difficult to picture. Luckily most of the descriptions were detailed enough that I could grasp what was happening.

Most of it, though, was surprisingly easy to read and understand. This is a dense book - almost 600 pages of rather small print that took me close to a month to read - but it never felt like a chore. Massie brought Catherine and her contemporaries to life in his prose, and provided enough context to really understand why everyone believed and acted as they did. It's a compelling story, written in a beautiful and engaging style. I honestly can't believe it hasn't been made into a mini-series. I only touched on the story here, but it's chock full of drama and twists and the setting alone would really lend itself to television. I will absolutely check out more of Massie's writing, probably starting with Nicholas and Alexandra, when I'm ready to take on another huge book.

I read this for my 2018 TBR Pile Challenge, bringing my total to twelve completed. This includes my two alternates, but I still have two unread on my main list. Will I finish them in the last three months of the year? We'll have to wait and see.
Posted by 3goodrats at 7:51 PM