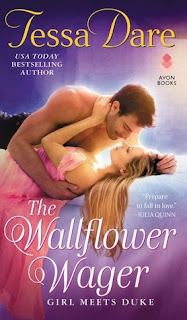 We've met Lady Penelope Campion earlier in this series. She is an animal lover - her house full of a whole menagerie of animals from a dog to a goat to a hedgehog - and a vegetarian who is constantly foisting her creations, such as her "sham" sandwiches on her friends. She is also (unsurprisingly?) single. When the book opens, her Aunt Caroline tells her that her brother is on his way to come collect her and take her back to the country since she has no marriage prospects and has pretty much squandered her opportunities in society. Penny panics, and makes a deal with her aunt that she'll get rid of all her animals and appear in the society pages at least once if it means she can stay.

Meanwhile, the house next to hers has been newly purchased by Gabriel Duke, also known as the Duke of Ruin. He has a tragic backstory of growing up in a workhouse and making himself rich, I guess by financially ruining other people. He has a terrible reputation, but Penny is irresistibly drawn to him and doesn't care what anyone else thinks. He's planning to resell the house after it's remodeled and wants Penny to stay in her house because apparently having a Lady next door makes the property more valuable, so he ends up agreeing to help her rehome her menagerie and make it into the society pages.

I read all three books in this series because I had heard such good reviews of this one, but it turns out to be the book I liked least. The premise wasn't very strong to begin with and somehow the romance between Penny and Gabriel didn't have enough tension for me. The latter part of the book, where things ramp up before the finale, was not very satisfying. Without spoiling too much, it involves a part where Gabriel threatens another person on Penny's behalf and without her approval, which is thing I hate, and which also happened in the first book in the series. Here though, it was worse and he could have gotten himself killed, which makes it clear it's something he's doing to satisfy his own anger and not actually for her (which I think is usually the case when men get all self-righteous about going after someone who wronged their woman.)

Also, this all came to a head in the middle of a ball, and things were kind of left hanging. When the person arrived who had wronged Penny in the past, Gabriel took him to his study and Penny followed and it got all dramatic, but then the story skipped ahead to the morning. First of all, Gabriel was going to announce their engagement at this ball. But did they even return to the ball after this meeting? I mean, they must have since it was at Gabriel's house. Or did he make everyone leave? It was weird to not even mention this. Also, just before this thing happened, Penny's friend Nicola freaked out because she spotted someone in the ballroom who she said was her fiance, and everyone was shocked and asked her to explain. They all went to discuss this surprise, but Penny followed Gabe instead and this thread of Nicola's secret relationship was never picked up again. I assume that's what the next book will be about, but it was handled rather clumsily here.

I know a lot of people loved this book, and I didn't dislike it enough to stop reading it - mostly, it was fairly amusing and I do love Penny's character. But when all was said and done, it fell rather flat for me.
Posted by 3goodrats at 1:09 PM