The Boy Who Couldn't Sleep and Never Had To : a review 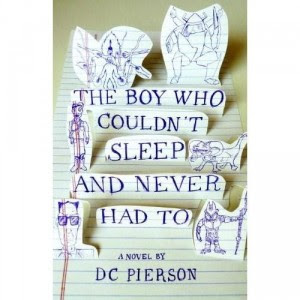 Darren is a loner who lives with with his absentee-in-spirit father and troubled older brother. He has no real friends at school and spends most of his time drawing characters for a movie trilogy with novel tie-in that he is working on. Then he meets Eric, another social misfit who takes an interest in Darren’s project and together they begin working on what is sure to become a successful series of movies, books, and merchandising opportunities. Eric lets Darren in on his secret – he has never been able to sleep and never had to. The story was fresh and original and went somewhere that I didn’t expect.

Writers are really young now. There were things I barely understood in this book because of my age and distance from today’s youth culture. But I really enjoyed the book – the narrative voice was like a sophisticated Napolean Dynamite crossed with Bleaker from Juno. Also, there is a mixtape! How retro that must be for DC Pierson, who is surely too young to have ever made an actual mixtape on cassette.

Pierson also co-wrote the movie Mystery Team, which I also recommend. Two thumbs up for both the book and movie!
Posted by 3goodrats at 8:54 PM