Doctor Who Hat : the sequel (finally!) 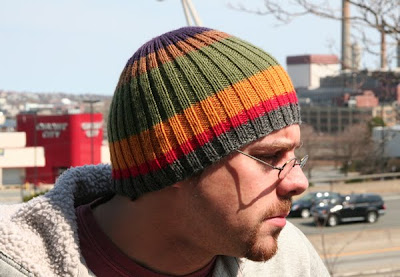 For those of you who haven't been following along, way back in 2006 (I think) I knit the approximately 46 miles of garter stitch known as the Doctor Who Scarf. This was followed by the Doctor Who Fingerless Gloves in late 2007. (No, I never did make the mitten caps - sshhh!)

Then, to complete the set, all I had to do was make a simple striped ribbed hat. Easy peasy, right? Well. I made one, using the top-down hat guidelines from a book called The Knitting Man(ual). I had previously made some hats from this pattern that came out fine, but they were not made of sport weight yarn and I don't think the rate of increase was right for that gauge. It pulled together in a comically condom-like way at the top, pulling the hat right off his head.

I tried again, this time using the traditional bottom-up hat method. It came out with the same problem, albeit to a lesser extent. Still not good enough. Then I spent a good six months procrastinating, hemming, hawing, researching hat construction, and knitting other things. I swear, I spent a great deal of time trying to figure out the proper rate of decrease for a ribbed hat knit in sport weight yarn, but I couldn’t find a similar pattern. All the advice on the matter that I could find was of the “just experiment!” variety. But I felt like I had spent enough time experimenting.

Earlier, I had come across this tutorial for knitting a flat top for a ribbed hat. It seemed like what I was looking for, though I didn't like the way the top of the hat looked - the flat stockinette portion seemed out of place in the ribbed hat. But I trust TECHknitter and knew that it would at least come out the way it was supposed to. If nothing else, at least I'd be able to cross this project off my list. So I ripped back the top of the hat and followed these instructions to finish it. 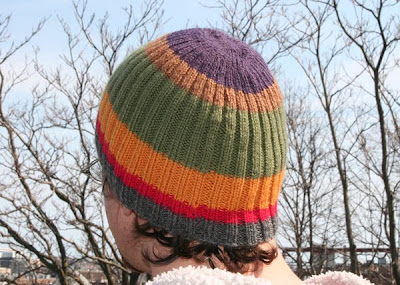 And you know what? It doesn't look bad at all! In fact, I would even say the hat is quite beautiful. I don't know why it was so incredibly difficult to knit it - but I am very happy that it is done. That's it - no more Doctor Who themed knits of any kind!
Posted by 3goodrats at 2:12 PM

It is gorgeous! Congrats on crossing this off the list :)