The Braindead Megaphone : a review 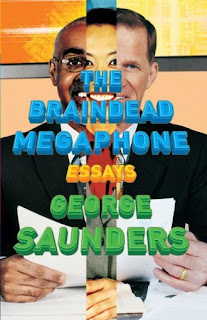 This book has been on my “to read” list ever since I read George Saunders’ introduction to Nick Hornby’s book The Polysyllabic Spree (or was it Housekeeping vs the Dirt?) Either way, I rarely make it through introductions, much less enjoy them as much as the book they are introducing. But it was clear that Saunders was worth reading. I’m only sorry it took me so long to getting around to reading his book.

It’s hard to describe a book of essays, so I’ll just share some of my favorite passages.

In the title essay, Saunders begins by having us imagine a prehistoric person and thinking about how many voices that person would be exposed to. He then contrasts that with the present day when radio, tv, newspapers and the internet expose us to so many different voices from all over the world, which try (and many of which succeed) to shape our opinions.

He characterizes the direction of this trend by saying, “…the nightly news may soon consist entirely of tirades by men so angry and inarticulate that all they do is sputter while punching themselves in the face, punctuated by videos of dogs blowing up after eating firecrackers, and dog-explosion experts rating the funniness of the videos.”

From “A Brief Study of the British”:
“But I am an American, and a paucity of data does not stop me from making sweeping vague conceptual statement and, if necessary, following these statements up with troops.”

His essay “The United States of Huck” was of special interest to me as I just recently read, and disliked, the Twain classic he discusses. I couldn’t ever figure out why it was supposed to be so great, but Saunders explains:
“It is a great work of our national literature because, more than any book before or since, it locates itself squarely on our National Dilemma, which is: How can anyone be truly free in a country as violent and stupid as ours? The book still lives, because the question does.”

(I’m making it sound like he hates America, but keep in mind these are just the quotes I chose. Many of his essays have nothing to do with the current state of the US.)

His essay “Thank you, Esther Forbes” recounts his youthful discovery of the novel Johnny Tremain. He describes her writing with the lovely sentiment, “They were not merely sentences but compressed moments that burst when you read them.”

A couple other pieces in the book recount a trip to Dubai (which prompted me to do a Google image search on Dubai, which I highly recommend), and a trip to Asia to visit a young boy who had allegedly been in a state of meditation for 8 months. His spoof advice column “Ask the Optimist” was another humorous piece, bordering on the ridiculous.

I rarely read essays, but humor makes everything more palatable to me and I found this book very readable and enjoyable.
Posted by 3goodrats at 9:14 AM