I cast on for two projects in the last couple of days, neither of which I had planned on and neither of which even appeared in my extensive, 4-page Ravelry queue. I’m breaking them into 2 separate posts for reasons of length and sanity.

I’ve been in a bit of a knitting rut, every project stalled at a different spot and little enthusiasm or clarity to proceed on most of them. During the week I finished the third and final iteration of the Doctor Who Hat (pics coming soon!), and the feeling of completion made me so happy I just wanted to start something new.

First, I cast on for the Bramble Stitch Shawl from The Knitter’s Bible: Knitted Accessories by Claire Crompton. Ages ago, I bought some Farmhouse Yarns Bo Peep’s Not Just For Socks Yarn in a lovely colorway called Glacier Mist. When I cast on for some socks, however, I found that the yarn is much too thick to be called a sock yarn. I only have one skein, generous though it is, so I began thinking about some sort of shawl or wrap. Most shawl patterns I was able to eliminate as possibilities right away as they call for lace weight yarn and involve intricate lace patterns which this yarn, even if it was lace weight, would be unsuited for because of the variegated colorway. Also, I hate knitting lace. But in a Ravelry search for shawls using DK weight yarns, I was happy to find some appealing shawls made from this pattern I already own. More interesting than plain garter stitch but simple enough for this yarn, the pattern seems like a perfect fit. 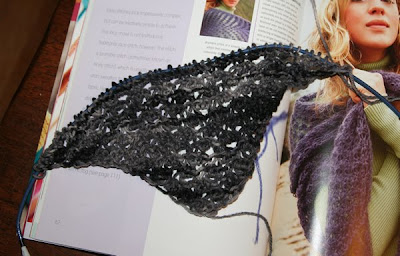 This is the first pattern I’ve made from this book, which I received as a gift from the Cable Girl back in ’08, or possibly ’07. (These, by the way, are to be pronounced “aught eight” or “aught seven” a la Grandpa Simpson.) I’ve consulted the book many times as a reference on other projects such as the Dr Who fingerless gloves, and just to admire the pretty patterns, and now I’m happy to be making an actual project from it.

There are two things I especially like about the book:

1. For almost all of the patterns, it shows different versions of the projects made with different yarns. For example, the recommended yarn for this shawl is a light-weight solid colored mohair, but inset photos show swatches of the pattern knit with 4ply-cotton on smaller needles, and a version knit with a variegated wool yarn.

2. The book doesn’t pimp specific yarn brands. Sometimes I do like to know exactly what was used for a pattern, and there is a handy appendix in the back of the book that lists the brands used for the samples of each project. But the instructions very helpfully lists materials such as “light-weight tweed wool yarn” or “medium weight aran wool/cashmere mix” which makes substitutions far easier. When one is just given a brand name and wants to find a suitable substitute, it means having to research the weight and fiber contents of that specific yarn before trying to find a similar yarn. (Don't be tempted to use the pattern gauge as a guide either, because many patterns use yarns knit at a tighter- or looser-than-recommended gauge.)

This is the perfect weekend for new knitting projects because it is so rainy and disgusting that I don't want to go anywhere. I'll post about my other new project either later today or tomorrow.
Posted by 3goodrats at 12:58 PM