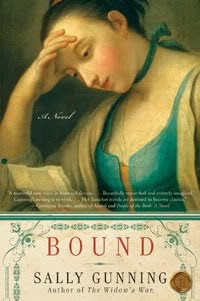 I hadn’t even heard of this book until the Cable Girl suggested it for book group, but it was right up my alley. A colonial girl grows up an indentured servant, but when her situation turns abusive she escapes. But her past catches up to her and she eventually ends up on trial for murder. Alice is the colonial equivalent of the high school student who won’t admit she’s pregnant until she ends up giving birth in a dumpster. She is naïve and makes some poor choices, but is still likeable.

There were many times in the story that it didn’t go the way I thought it would, and many times I really wasn’t sure what she’d do. Perhaps it’s a poorly developed character that can’t be predicted, but it kept my interest and added to the pleasure of reading this book.

Just as with the Laura Ingalls Wilder series and all the other historical writing I’ve enjoyed, it’s the domestic details that I really love. In this novel, there is much spinning, weaving, knitting, gathering of flax, applying of poultices – so many wonderful details of life in that time period. In this case it was also tied in with political issues because there was a boycott on imported fabric. Knitting and weaving as political activism, how perfect!
Posted by 3goodrats at 8:24 AM