Now that Christmas has passed, I can show you what I’ve been knitting recently. 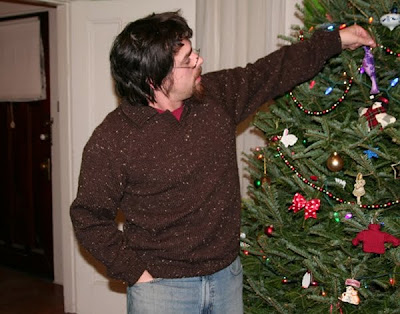 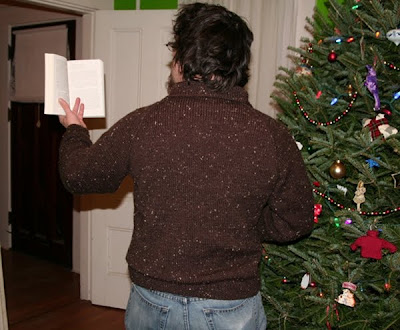 Let me tell you, knitting a sweater entirely in secret for someone you live with is extremely difficult and time-consuming. To have this done for Christmas, I started in August – August! And still barely finished. In fact, it still doesn’t have buttons (though I bought some on December 23rd) but I think we’ve agreed that it doesn’t need them. I'm relieved that it fits and that Eric seems to like it.

A few years ago when visiting the family in Maine, my mother pointed out that she made the sweater my sister was wearing. Eric commented that he liked it and wouldn’t mind having one so my mom gave me the pattern. I’m sure he forgot that conversation long ago, but I didn’t. When I decided back in August to knit him a sweater for Christmas I thought of this simple pattern – it's stockinette with a simple construction, and as a bonus someone I knew had already tested the pattern so there shouldn’t be any major errors or other surprises. Very different than the last sweater I knit for him, which took six months without having to work in secret.

When I began this project I set deadlines for when each part needed to be completed. The back by the end of September (which included an 8-day trip to Amsterdam without the project), the front by the end of October, the first sleeve before Thanksgiving. That left December to make the second sleeve, sew it all together, and make the button bands and collar.

I took the project to knitting group, to friend’s houses, to work. I kept it stashed in a drawer by the bed and even worked on it late at night before going to sleep. On mornings that I had off, I tried to rush Eric out of the house so I’d have more time to knit alone before I had to go to work. I encouraged him to spend more time with friends. Anything to gain knitting time. I finally finished on December 20th (except for the aforementioned buttons).

The pattern is from a Mary Maxim flyer which originally came as part of a kit. The only slight modification was that I picked up stitches along the neck for the button bands instead of knitting them separately and sewing on as directed. I did knit the collar separately and whip-stitched it onto the neck opening. I used Plymouth Encore Worsted yarn and needle sizes 7 and 5. I haven’t knit with straight needles in a while and, man, they stick out really far. They kept getting caught on things and I almost poked my cat’s eye out. 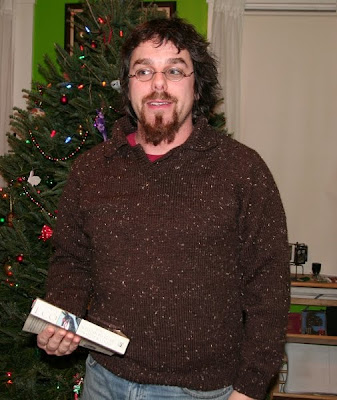 Wow! It is even more beautiful in one piece than it was in many pieces!

I love the line about encouraging Eric to spend more time with friends, hee! You did a great job under unusual circumstances.

Hi, I came across your blog from Already Pretty and one of the comments you made. I really like it and I love your jumpers you've knitted! I'm in the middle of knitting my first adult jumper (for myself) and have one sleeve to finish, another one to knit, then stitch the whole thing together. I am very excited but also, as you say, want the whole thing to be over quite soon!

Look forward to reading about your other projects and reviews.

Thanks, and good luck! I look forward to seeing your finished project!