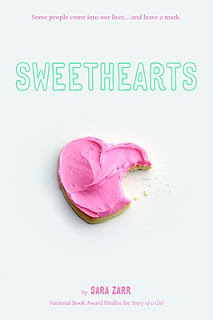 When Jennifer Harris was a kid, her best friend was Cameron Quick. Jennifer was a compulsive eater, Cameron lived in an abusive home, and neither of them fit in at their school. One day Cameron just disappeared and Jennifer learned that he had moved. Her devastation was complete a few months later when she heard that he was dead.

Years later she is reinvented as Jenna Vaughn, and lives a seemingly perfect life with her mom and stepfather, lots of friends, and super hottie boyfriend Ethan. But when Cameron suddenly resurfaces, Jenna is forced to confront her past and reconcile Jenna Vaughn with Jennifer Harris.

Jenna and Cameron have one of the most intense relationships I’ve read in a long time. Not only were they exclusive BFFs who were misunderstood by everyone else around them, but they experienced a trauma together when they were kids. Although theirs was always a friendship and not a romantic relationship, when they were reunited there were definitely strong feelings and sexual tension. Zarr expertly creates a bond between the two characters based on their childhood friendship and shared trauma, and vividly recreates feelings of teenage lust and angst.

Cameron was completely swoonworthy - an attractive, yet tragic, loner from a broken home. Jenna was a great character too, because she had complicated problems but wasn’t portrayed as too self-aware for someone her age, as many teen characters are. She didn’t handle things especially well, but did it pretty much how I would have at her age. (Or possibly now.) Although I found her mother rather two-dimensional, I thought her stepfather was fantastic. They had a good relationship and he was just slightly dorky and standoff-ish and totally charming.

Sweethearts was one of the best YA books I read this year. Of course, I am always a sucker for a good unrequited romance.
Posted by 3goodrats at 9:15 PM