Another Bullshit Night in Suck City : a review


Another Bullshit Night in Suck City by Nick Flynn (2004) 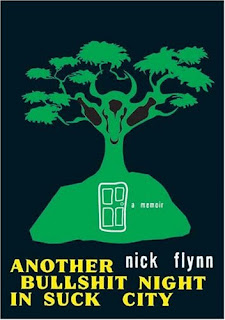 Maybe the city sucks, but the memoir sure doesn’t. Nick Flynn has written an account of his time working at the Pine Street Inn, where he crosses paths with his absentee father. Both men have had pretty hard times and it seems as if Jonathan serves as a warning to his son. Nick writes about his addictions, his somewhat drifter lifestyle, brief involvement with drug smugglers, failed relationships, his mother’s suicide. Multiply his issues by 10 and you’ve got his father. Decades of alcoholism have ravaged Jonathan, and he seems to be sustained by his delusions of grandeur. He is convinced that he will be a Great Writer and that his book, once sold, will be a huge success, but as much as he talks about it Nick isn’t convinced the book even exists. Jonathan lives in hovels, or the shelter where Nick works, or sleeps on benches or in ATMs. Flynn expertly weaves their stories toghether, though their paths do not cross often or for long.

Flynn is very matter-of-fact about his life, which by any measure is pretty tough, but he does not try to evoke sympathy. I liked hearing about the day-to-day procedures at the shelter, about the men who are regulars there. He passes no judgment on the homeless or blame them for their situation. His descriptions of his father were similarly distant, but filled with the kinds of details that painted a lifelike portrait. He describes another side of Boston, one that I know is there but only catch glimpses of.

But the book isn’t just a chronological listing of facts. Flynn plays with narrative styles, including a short one-act play, a stream-of-conciousness chapter, and peppers the text with quotes from Shakespeare. Rather than desctracting from the topics at hand, these excursions seem appropriate to a memoir about two men prone to wandering and aimlessness. I’m happy that Nick Flynn has found the success he father always craved, and now that his memoir is soon to be made into a movie, it seems that continued success is assured. But don’t wait for the movie – read the book now!
Posted by 3goodrats at 7:48 AM