The Sweetheart of Prosper County : a review

The Sweetheart of Prosper County by Jill S. Alexander (2009) 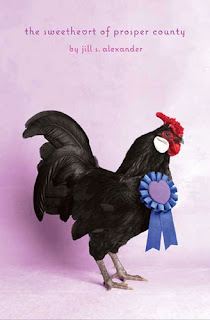 More young adult books should be set in Texas. The backdrop ensures that these are not typical YA characters. They live in the country, they raise barnyard animals, they pray, they hunt. They are the Future Farmers of America! Every year one of them gets to ride on the hood of a car in the No-Jesus Christmas Parade, and Austin Gray is determined that next year she too will be a hood ornament. She joins the FFA, adopts a rooster named Charles Dickens to enter in the poultry division, and even tries her hand at grappling. It is all very fun and country fried!

But there is a dark side to Austin's life. Six years ago her daddy drowned in Prosper Lake and although she and her mom have made an art form of moving on, it is clear that neither one of them has actually done so. Austin's activities in the FFA and her new relationship with Lafayette Boudreaux (from whom she obtained Charles Dickens) dredge up her mom's anxieties until ultimately the two are forced to confront what happened to Austin's dad. To make matters worse, Austin has to deal with her nemesis, the bully Dean Ottmer, making fun of her every day.

What a great departure from the recent dark paranormal/vampire/zombie books with their uniformly black and silver colors. (Seriously, have you checked out the YA aisle in a bookstore recently?) As you can see, this cover is pink and has a chicken on it. If you're getting tired of the same stories of romance with the undead, this little book will perk you right up!
Posted by 3goodrats at 3:19 PM

I really love this review. One of your best.

Hi. I am just an occasional reader, but I have checked out the YA aisle at the local bookstore lately. Yikes! One local B&N has an entire YA paranormal section. The regular YA section was tiny.

It's so true! I hope this trend will pass. Paranormal is fine, but variety is better!