Heart of the Matter : a review 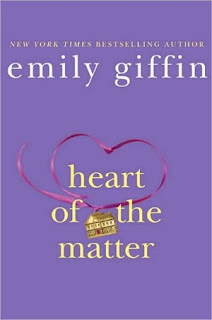 What would you do if your husband cheated on you? Would you throw him out, or forgive him and try to patch up your relationship? This is the central question of this chick lit novel from the author of Something Borrowed, (soon to be released as a movie.) Tessa is married to pediatric plastic surgeon Nick, and lives in Wellesley, MA. Once a career woman, she gave it all up to stay at home with her kids, and is beginning to feel dissatisfied with her life. Her friends are of the Stepford Wife variety and she simultaneously likes and dislikes them, wants her kids to get into private school and opposes everything it stands for. Valerie is a single mom (and a successful corporate lawyer) in the same community. When her son Charlie is badly burned in an accident, Nick becomes his doctor and Valerie’s friend. Over the course of the novel their friendship escalates into something more.

The chapters alternated between Tessa and Valerie, Tessa’s chapters written in first person and Valerie’s in third. (Nick remained a mystery, which is appropriate since neither woman knew what the hell was going on in his head.) Unlike in most novels where there is spousal cheating, both Tessa and Valerie were likeable characters and I was unable to root for either of them at the expense of the over, nor was I able to predict the outcome. Tessa had a conversation about the cheating question with her friends early in the book, but of course it’s completely different when it is hypothetical. Tessa has spent a lot of time thinking about this topic because her father’s infidelity was the reason for her parents’ divorce. Late in the book she has a very interesting and influential conversation with her parents about this.

This certainly wasn’t a shopping-and-dating-and-drinking-martinis kind of chick lit book, but rather one that probes at a timeless issue with no easy answers. Comparing her situation to that of her mother and Eliot Spitzer’s wife, Tessa had to decide what to do in a situation in which the outcome of her life – and that of her children – would be forever affected. I thought it was handled fairly well and enjoyed the book the whole way through. As a sidenote, Tessa’s brother was Dex, a central character from Something Borrowed, which was a fun surprise, as were the allusions to Dex’s early relationship with his wife (and I won’t mention who that is, in the interest of not spoiling Something Borrowed for you).

I listened to the audio version on Playaway, my preferred audio format, while walking to and from work. I love chick lit on audio and, indeed, it seems to be the only genre I can handle in that format, but my library system sadly lacks playaways in this genre. Cynthia Nixon was a great narrator who managed to get the tone exactly right and make the voices different enough to recognize without making any of them sound fake. I really enjoyed listening to her read this book.
Posted by 3goodrats at 9:00 PM