The Book Thief : a review 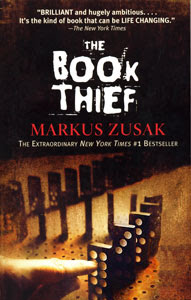 We first meet Liesel on a train. Her mother is bringing both children to Molching to live in a foster home after their father has been taken away for being a communist. On the train ride, the boy dies and Liesel steals her first book. After arriving at the home of Hans and Rosa Hubermann, her new foster father teaches Liesel to read using the stolen book. Over the next few years Liesel befriends her neighbor Rudy Steiner, a Jew named Max Vanderburg, the mayor’s wife Ilsa, and sustains herself throughout WWII and all its tragedies through her love of books.

Death is the omniscient narrator, and in the prologue he describes the few times he has met the book thief. Because it jumped around in chronology and I had no context for the events or any idea who the characters were, the whole beginning was confusing and I promptly forgot everything about it. Though I began with mixed feelings about Death as a narrator, overall it added depth to the story. The main focus was on Liesel and her friends and neighbors in Molching, but Death placed these stories in the larger context of what was happening all over Europe during this time.

Zusak is generous with metaphors, but they don’t all work. “Her voice was like suicide.” “They shivered like the future.” I have no idea what those mean and felt like he was trying too hard. They sound poetic, but metaphors should also add to the reader’s understanding and these do not. Despite this small shortcoming I liked his writing, such as the way he animated inanimate objects: “Hans Hubermann had her by one hand. Her small suitcase had her by the other.” He knows how to develop a story and its characters, setting us up for heartbreak.

Through most of the book I felt like it was only so-so. I’ve read so many books, fiction and non-fiction, about that era that I always feel like I can’t possibly read another one. Filled to the brim with death, fear, and cruelty, they are all essentially about the same thing. But I’m a sucker for a book-loving theme, and the characters felt so real that as I progressed through it I became very invested in these people and, consequently, saddened by their many tragedies.
Posted by 3goodrats at 9:14 PM