Heaven to Betsy : a review 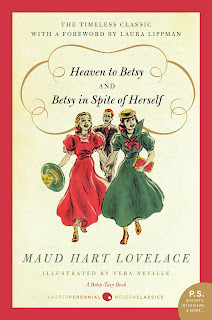 Written in the 1940s, the Betsy-Tacy series is set in Deep Valley, Minnesota at the end of the 19th and beginning of the 20th centuries. The two main characters, Betsy and her friend Tacy, are children in the early books but the series follows them into adulthood, the reading level increasing as they age.

Because I’m so fond of YA, I skipped the kids’ books and started with the combined volume Heaven to Betsy/Betsy in Spite of Herself, which covers their first two years of high school. And what fun and exciting years they are! Betsy Ray is such a typical, recognizable teenage girl that it’s easy to forget she’s starting high school way back in 1906. The girls are silly and fun, writing songs about the boys they like, using a Ouija board to predict the future, talking on the phone, putting off homework until the last minute, and trying to create new and mysterious personas for themselves. They have inside jokes and catch phrases, at one point constantly crying “O di immortales!” and during another period, “Hully Gee!”

The period details are just the best. Every night Betsy puts her hair in Magic Wavers, and then styles it into a pompadour. Cars are new and Betsy at one point has a boyfriend with a car and they drive around at a thrilling 20 miles an hour! Imagine!

Lest you think being a teenager was all fun and carefree in those days, it’s important to mention their more serious concerns as well. When Betsy and her sister Julia decide they want to become Episcopalian though they were raised Baptist, they are both terrified of confronting their father about it. And like any teenager, Betsy has ongoing struggles to remain true to herself. She gets so caught up in being part of a crowd that she goes along with them regardless of what she really wants. Although Betsy hates skating, “she always pretended radiantly to like whatever the others liked, and the others…adored skating.” Another time, after a failed romance with a boy, she is sleighing with a large party including said boy and his new flame. “It was a horribly party for Betsy who remarked at frequent intervals that she never had had so much fun in her life.”

We frequently think of women in that era as being confined to the roles of housewives and mothers, but one of the great aspects of these books is that the characters have big ambitions. Sure, Betsy is as taken with romance as any teenage girl, but she has always wanted to be a writer and that doesn’t take a back seat to any man. Similarly, her sister Julia is devoted to music and even turns down a marriage proposal because she wants to pursue her dreams. Betsy is a bit appalled at how fixated on marriage some of her friends are, having alrady picked out silver patterns and started embroidering towels for their hope chests. “When Betsy and Tacy and Tib talked about their future they planned to be writers, dancers, circus acrobats.” It’s all very hopeful and inspiring!

This recent edition includes a forward by Laura Lippman, which was an added bonus. There’s also some great author information in the back – the whole series is apparently strongly autobiographical, which would account for how realistic it is. In a way, it’s like a slightly more grown-up and modern version of the Little House books. Which of course is my way of saying how much I loved it.
Posted by 3goodrats at 3:27 PM