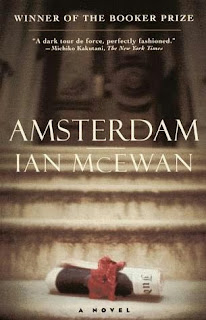 We are introduced to two former lovers of Molly Lane when they meet up at her funeral. Horrified by the circumstances of her illness, during which her mind swiftly deteriorated, Clive and Vernon make a euthanasia pact. But soon their longtime friendship begins to fall apart. Clive is a composer, under intense pressure to finish his symphony celebrating the turn of the millennium. In his efforts to avoid distraction he fails to report a potential crime. Vernon, a newspaper editor, comes by some compromising photos of a top government official and wants to use them to boost his failing paper's circulation. Each disapproves morally of the decisions the other has made, the stress of their disagreements only serving to make their individual problems worse.

This short novel contained some beautiful passages describing music, and Clive's composition process during which he struggles to capture the elusive strains of notes he is searching for. I wonder if McEwan has a background in music.

He is adept at character development and at describing internal turmoil. As is typical with his novels, Amsterdam was somewhat painful to read. Misunderstandings arose and the consequences made me cringe. It's like watching an accident in slow motion and being unable to stop it. I don't really like the feeling, but I keep reading his novels so it must appeal to me on some level.

Unfortunately I found the ending a bit contrived and disappointing. A winner of the Booker Prize, I had high expectations for this novel, but of the five McEwan novels I've read I wouldn't say it's my favorite. (That distinction would go to Atonement.) Although I enjoyed the buildup throughout the novel, in the end it fell flat.

Have you read it? Do you think it deserves the praise and awards it has received?