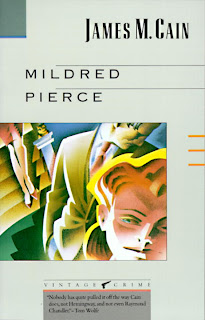 As anyone in town would tell you, Mildred had great legs. She was also a fantastic cook, resourceful, and wouldn't take crap from any man. At the opening of the novel, Mildred is kicking out her husband Bert, who is having an affair. Left alone with two daughters, she is barely scraping by and sucks it up and starts looking for a job. But it's the Depression and work is scarce, and Mildred is picky, thinking she is too good for most of the jobs out there. Finally landing a job as a waitress, she gets a very ambitious idea and despite the tough times ends up opening her own restaurant. It would have all been very tidy if it weren't for the poor choices Mildred made in her personal life. She unfortunately had two major weaknesses: she kept getting wound up with the wrong kind of men, and she let her daughter Veda walk all over her.

Despite her flaws, I felt a kind of kinship with Mildred. She was admirable in many ways, but would also be fun to hang out with over cocktails. She not only works hard, but knows how to have a good time. But the poor gal, she couldn't resist certain money-sucking cheating lying men. Furthermore, the musically gifted Veda, for whom Mildred sacrificed so much, was not only ungrateful and snobby, but completely manipulative and dishonest. Veda had little respect for her mother, of whom she admitted to being ashamed, and was very free with the insults, name-calling, and emotional blackmail. Mildred had only herself to blame for allowing such horrid behavior and by indulging Veda's every want, but I don't think she ever came to realize that she contributed so much to the way Veda turned out.

The story arc had some unexpected turns, a major tragic event coming almost halfway through the book and taking me by surprise. I like Cain's steadily paced writing, straightforward and peppered with a lot of short action statements. "Then she hopped in. Then she started the motor. Then she started the wiper. Then she tucked the robe around her." In particular, I liked the industriousness of the descriptions of Mildred's business, how she managed her restaurants and baked her pies. The reader will not forget the era in which the story takes place - the talk of Prohibition, bootlegging, and FDR keeps us firmly rooted, not to mention that the language and expressions are very much of the time. I didn't always know exactly what the characters meant when they spoke, but I liked it all the same.

Mildred Pierce was my book group's August pick as part of our effort to read classics in the summer. Less well-known than many titles that spring to mind when we think of classics, it was an excellent pick (if I do say so myself). If you've overlooked this title, I urge you to give it a try. There's a lot to love about it!